TheGenealogist is releasing the third part of its unique online record set, The Lloyd George Domesday Survey. This major resource based on records created for the Valuation Office survey can now be used to find where an ancestor lived in 1910 in the area around Brent. This useful combination of maps and residential data from The National Archives is being digitised by TheGenealogist to bring it online for the first time. These records precisely locate an ancestor’s house on a large scale and extraordinarily detailed hand annotated map so pinpointing the exact property. 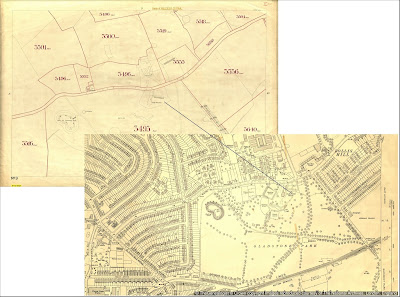 Family historians are often confused by modern maps when looking for where ancestors lived as the road names may have changed over time or been rerouted or extinguished. Wartime bombing saw areas razed to the ground. In the 1960s and onwards, developers changed areas of the country out of all resemblance from what our ancestors would have been used to. The passing of time means that searching for where an ancestor lived using websites linked to modern maps can be discouraging when they fail to identify where the old properties had once been. The area released today was still the location of farms and countryside at the time of the Lloyd George Domesday survey - but with the ever encroaching urbanisation of Brent the council moved to buy land to create a park for the future suburb of London.

Augmenting the street maps on TheGenealogist are images of the pages from the accompanying Field Books. These can give the researcher detailed information about the property, including the valuation assessment number, map reference, owner, occupier, situation, description and extent.

TheGenealogist’s digitisation of the Lloyd George Domesday Survey is a huge ongoing project with over 94,500 Field Books, each having hundreds of pages to scan with their associated large scale IR121 annotated OS maps. This latest release from TheGenealogist includes these detailed IR58 Field Books that contains a great deal of information about the properties that had been surveyed.

The release this month, covers Brent and joins Barnet, Edgware, Finchley, Friern Barnet, Hendon and Totteridge, plus the City of London and Paddington Index and maps that have previously been released by the company. More areas will be released soon for other London Boroughs and the county of Buckinghamshire.

Find out more at: TheGenealogist.co.uk/1910Survey/

You can also read our article about how the Lloyd George Domesday Survey reveals a rural idyll that disappeared into suburbia here: https://www.thegenealogist.co.uk/featuredarticles/2018/lloyd-george-domesday-survey-reveals-brent-as-a-rural-idyll-in-1900s-952/