Bringing back websites from the dead

One of the most frustrating things that we can encounter in our research is a website that seems to be a gift from the genealogical gods, only for that site to suddenly disappear overnight. This may be because the site creator no longer wishes to maintain it, may no longer wish to pay the online hosting fees, may well have created a replacement, or may even have passed away. There is a way, however, to retrieve some of these sites, and that is to visit a site where a cached version may have been saved.

The most useful of these sites is perhaps the Internet Archive's Wayback Machine, available at https://archive.org. If you do wish to locate an older version of a site that has since died, simply type in the URL to the Wayback Machine browser bar and then click 'Browse History'. If the project has grabbed a snapshot of the relevant site you will be given a page with both a bar along the top noting the various years and dates on which this was done, as well as an interactive calendar, from which you can then choose to revisit the earlier incarnation of the site on a particular date before its 'death'.

There are a few things to note. If a cached site contains a searchable database, or a third party link, those may not work in the cached version. It may also be that on the some of the dates on which a cached version is said to be held, a dreaded error message may pop up, but if this should happen, don't despair immediately, try some of the other dates on which it was said to have been recorded.

Take for example a highly popular Scottish site in its day, Scotsfind, at www.scotsfind.org, which sadly ceased to work in 2010. One of the most useful things about this site was the various PDF documents it hosted with historic records such as Edinburgh apprentices, Edinburgh marriage registers, Inverness testaments, a presbytery book from Kirkcaldy, as well as all sorts of one name study lists, including records for families such as Biggar, Bird, Cossar, Doig, Dryburgh, Edmondston, Fiddler, Oliphant, Trotter, and many, many others. A search using the Wayback Machine allows me to find several cached versions of the site from 2002 -2010, each with its own dedicated archive URL address. On some of these, the links to the hosted documents just don't work; but on others - for example at https://web.archive.org/web/20070116015458/http://scotsfind.org/ - they most certainly do, and what was once a dead site can be retrieved and can continue to be used. 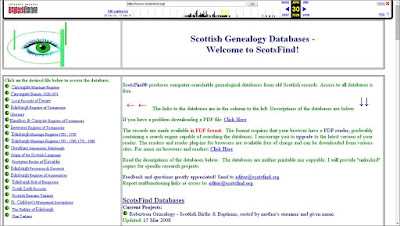 There may be many reasons for wanting to try to find an earlier version of a website. Whilst an update to a website may in theory be a good idea, sometimes the new site may not be quite as descriptive as its predecessor was, or it may be that information has been replaced. A site that previously offered information for free may have subsequently put it behind a pay wall or membership wall, and yet that data may still be accessible on an earlier cached version. My own personal family history site has changed dramatically since I first started it in 2001, and I often go back to see how things have progressed on certain lines, or to re-evaluate info I may have removed. For example I once had all the information on a murder case on the site, which I later removed to create space on the site - but there is a cached version of what I once had online, which can be very useful to see.

The reason I mention this now though is that I had the chance to meet the wonderful Cyndi Ingle of CyndiList (www.cyndislist.com) on the recent Unlock the Past Baltic genealogy cruise, and one of the questions I asked her during her talk on her website was about broken links; is she happy to accept cached versions of dead websites as a replacement URL on her site? The answer was an emphatic yes.

An old website no longer accessible in an everyday search may not necessarily be lost forever, and can very easily be retrieved in many cases through sites such as the Wayback Machine. So the moral of the story is that those old internet listings guide books you may be about to throw out may not be quite so useless and out of date as you may think!

For details on my genealogy guide books, including my recently released Discover Irish Land Records and Down and Out in Scotland: Researching Ancestral Crisis, please visit http://britishgenes.blogspot.co.uk/p/my-books.html.
Posted by Chris Paton at 14:58