On Friday I attended the latest user forum meeting at PRONI (www.proni.gov.uk) in Belfast. The following is a quick summary of developments, including one VERY special project on the cards just now! 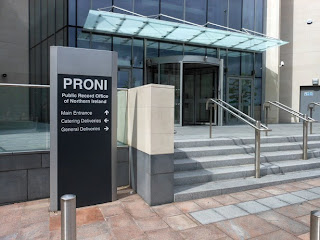 Graham Jackson gave us a quick overview on the release of the latest government files from 1987 (releases are now occurring twice a year, to help accommodate the change from a 30 year closure period to 20 years - files that were originally closed for 30 years but older than 20 can now be released). Records include various papers from the aftermath of the Anglo-Irish Agreement.

On the cataloguing front, Brett Irwin then informed us that administrative papers and general records of the Reformed Presbyterian Church from 1811-1979 have now been catalogued at CR5/5 (the church's Synod's first meeting was in Cullybackey in 1811). About 800 photos from the Londonderry Papers, mainly from Mount Stewart House, have also been catalogued now at D4567, comprised of photos and albums of the 7th Marquess of Londonderry and his wife Lady Edith and family. (It is envisaged that there will be an autumn lecture series on the Derry papers, kicking off in October and running into next year).  Brett also informed us that amongst new records deposited at PRONI have been records from the Irish Council of Churches (from 1923) and the Irish Inter-Church Meeting (from 1973), which should be catalogued in the next eighteen months.

Janet Hancock then updated us on a current fees and rules/regulations review process going on at the archive. Fees have not having been reviewed since 2009 and the subsequent move to Titanic Quarter. It is likely that the fee for several backroom services which charge will likely go up, but the whole thing has to go to the minister and to a public consultation in due course. Some of the proposed changes will affect areas such as visitor registration and copyright awareness when making copies of images. On the copying front, PRONI is still looking into the option of allowing photography, and it seems that photocopying at the facility will soon become an endangered species (for conservation/preservation of records reasons), with an increased use of overhead scanning capabilities and other means. On the options for making personal copies, it was mentioned that PRONI was likely going to take a precautionary negative approach on hand held scanners. I queried if this might include devices such as a FlipPal, but it looks like PRONI is really not keen for any device that makes contact with a document to be used.

Then came the highlight of the day! Janet demonstrated to us a new platform that PRONI is working on to provide a new online mapping service, providing historical access to geo-referenced historic Ordnance Survey maps, with optional historical data layering added that might flag up places and subjects of interest. This is very much a work in progress, but sparked a very enthusiastic discussion from all in attendance, with all sorts of possible projects that might be considered for layering data, from plotting the locations of old churches, to bomb drop sites in the Blitz and the identification of historic railway sites. I came away from the meeting thinking that this could give the National Library of Scotland maps site a good run for its money in due course, in terms of brilliance! Other layers that are currently planned include parish, boundary, county and townland boundaries, and it is hoped that the initial launch version of the project will be made available at some point in this business year, but as I mentioned, it is a work in progress. The old maps to be used in the first instance will likely be the first edition set of 6" maps, and a revision set from the early 1900s. I suspect this will start off gently, and just grow and grow - the potential for interaction with user groups that might be able to add project layers data on a range of topics is huge, but the team are still finding their feet with it, and need to walk first before they can run! Very exciting development though.

On forthcoming events, there is a lecture series soon on County Down, and in November Foras na Gaeilge will be running another four part lecture series. PRONI itself will be open on Saturday 12th and Sunday 13th September for European Heritage Week - this will include a full productions service on Saturday, and self-service facilities (microfilms etc) on Sunday. Both days from 9am-4.45pm. PRONI is also working on a work pack to discuss women's suffrage, as part of the Decade of Centenaries commemorations, and is also looking to do something on the 1916 Easter Rising from a northern perspective. Next year PRONI will also be running a conference about the First World War at sea, to tie in with the anniversary of the Battle of Jutland, and will also be tackling the Battle of the Somme, which will undoubtedly be of interest to many.

A few other quick notes - PRONI will close for Preservation Week again in early December, and the penultimate episode of the current run of Who Do You Think You Are will feature the archive. Gillian Hunt of the Ulster Historical Foundation also informed us that a ten week long family history course kicks off at Stranmillis College from Tuesday September 29th 20156 - for further details see www.ancestryireland.com/latest-news/new-family-history-course-stranmillis-college/.

Importantly, there is then this... 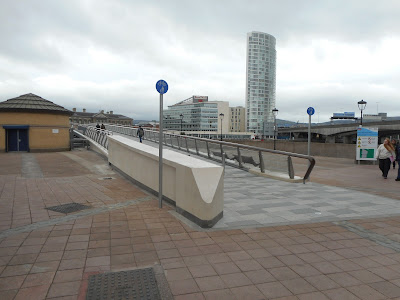 For years, this bridge over the Lagan into Belfast City Centre has quite literally done my head in, as its entry and exit steps on either side used to spin around in a tight spiral, and to get to the entrance you would usually end up banging your head somewhere against the whole sorry edifice (I'm six foot tall, not a hobbit!). Belfast - THANK YOU for rebuilding each end! I got home this time without a headache....!!!!

And this caught my eye - Transport House, the building that used to house the Transport and General Workers Union, has always had a distinctive mosaic mural themed on the industrial heritage of Belfast, facing onto High Street. It seems to have had some new murals added to it, to tie in with Unite moving back into the building, and in the same style - I think they look brilliant, so had to share! 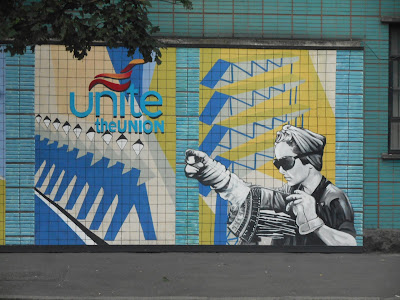 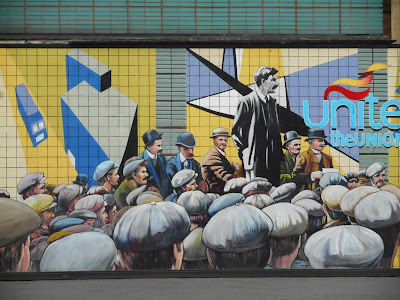 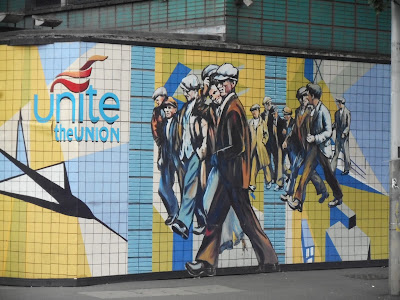 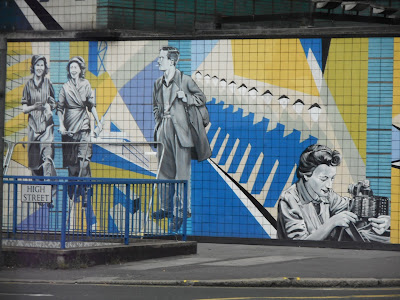 For details on my genealogy guide books, including my recently released Discover Irish Land Records and Down and Out in Scotland: Researching Ancestral Crisis, please visit http://britishgenes.blogspot.co.uk/p/my-books.html.
Posted by Chris Paton at 19:57