The Scots in British India talk by Sir Tom Devine

Thanks to Valmay Young at the Families in British India Society (https://www.fibis.org) for notice of the following: 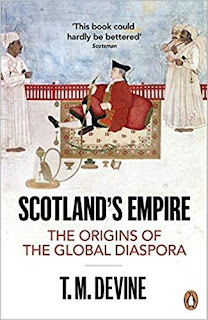 In this lecture Sir Tom considers the role of Scots in India in administration, the military and trade with special reference to the period from the late seventeenth to the early nineteenth centuries. Among the themes examined are the scale of Scottish ‘colonisation’ of the East India Company, the reasons for this and the impact of the India connection on Scotland itself.

The lecture will be followed by a wine reception and book sales. It is the final in this year’s series of lectures on British India, ‘THE RAJ Re-Examined’ (BACSA in association with the South Asia Centre, LSE).

My next Scottish Research Online course starts March 11th 2019 - see www.pharostutors.com/details.php?coursenumber=102. Details of my genealogical research service are available at www.ScotlandsGreatestStory.co.uk. For my Scottish and Irish themed books, visit https://britishgenes.blogspot.com/p/my-books.html. Further news published daily on The GENES Blog Facebook page, and on Twitter @genesblog.
Posted by Chris Paton at 17:45