UTV Archive at PRONI - and other PRONI news

Yesterday (Friday 15th) I had the pleasure to attend the latest Stakeholders' Forum at PRONI, Northern Ireland's national archive, in Belfast - albeit after a fairly choppy ferry crossing. The following is a summary of the some of the latest developments:

It was confirmed that the version of the document, PRONI Guide to Church Records, online at https://www.nidirect.gov.uk/publications/proni-guide-church-records is up to date. Accompanying this is a separate document, Church Records Available as Digital Copies in PRONI, which details which records exist in digital format on the archive's catalogue system, CALM. Both are invaluable resources for planning a trip to PRONI. It was confirmed that recent church records collections brought in for digitisation are now currently being worked upon.

The onsite catalogue, CALM, has had some performance issues over the last six months, which now seem to be resolved.

PRONI is currently cataloguing the Michael J. Murphy Papers, with help from students. Murphy was a folklorist and writer, with his papers from 1942-83 detailing his work for the Folklore Commission, with notebooks, diaries, and other materials.

The Ulster Society of Organists and Choirmasters papers consists of 12 boxes of material, including minutes, photographs, and correspondence from 1918-2017. Catalogued under D4701.

The Northern Ireland District Association Camping and Caravanning Club papers, with minute books, photographs, scrapbooks etc from 1964-2005, 15 volumes of material within 3 boxes, will be held under D4702.

The Presbyterian Children's Society – 10 boxes of material, correspondence and papers, application forms over the last 50 years, and more.

Ballyclare Church Lads Brigade - 6 boxes of material (including one for Limerick district), from the 1920s, including minute books, manuals, scrap books, and other records.


The UTV Archive at PRONI

This was of particular interest to me, having previously worked in TV myself (and having once interviewed the head of UTV!). Ulster Television was established in 1959, as the first commercial broadcaster on the island of Ireland. Its huge archive covers a vast amount of Northern Irish history and culture from that point, including interviews with Seamus Heaney, George Best, Van Morrison, Brendan Behan and others, of course, extensive coverage of the Troubles.

Unfortunately, as UTV has now been purchased by the ITV network, its archive is to be relocated to Leeds in England. I am personally appalled that Northern Ireland's broadcast heritage is leaving the country, but thankfully, PRONI has secured a five year agreement with ITV to digitise as much of the material as possible before it is sent to England for permanent storage. The aim is that Northern Ireland Screen will then make the material available on its Digital Film Archive (https://digitalfilmarchive.net).

About a hundred pallets of material from Havelock House are being taken by PRONI for the project, containing material from 1959-1993, mainly unedited rushes, with about 72,000 items. The following gives an idea of the breakdown of what is to be worked on:

The film material is being prioritised, as this is older and may be more brittle.

As part of this arrangement, PRONI will be opening a viewing room soon to allow visitors to view some of the tapes and films, and we were treated to a glimpse of this by Stephanie Routhier-Perry, who is working on the project. The room caters for film with a Steenbeck player, and various tape formats, including one ince, U-Matic, Beta SP, Digibeta and smaller tape formats also. Access provision will be quite strictly conditioned – appointment only, one viewer at a time, no ledning facility, and subject to normal PRONI conditions. Permission to purchase any material will have to be done through ITV.

In the Q&A I asked about whether UTV programmes are included in the project, but was advised that these are already in Leeds, PRONI is working mainly with rushes only. 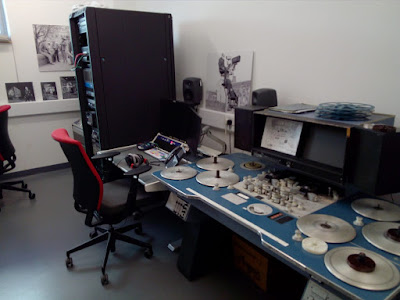 Women in the Archives

This is an initiative PRONI is working with local musuems and libraries on, and as a part of it, there will be two exhibitions in April, in partnership with the Linen Hall Library, called 'In Her Words' and 'Anonymous was a Woman'.

Another recent project called 'Buried in Belfast' saw 25 people working on stories from Milltown and City Cemetery, the outcome of which will see further initiatives, including a proposed trail map.

As a part of our discussions, it emerged that Belfast City Council is looking at possibly upgrading the online digital provision for its city cemetery records, with features such as a potential Boolean search to be developed, possibly even geo-tagging of graves. It is early days, but one to watch. We were also advised that the Council now has a dedicated Bereavement Services Manager, Michael Patterson.

Plantations in Ulster, 1600-41, will launch at Central Library in Derry on April 5th. This will tie in with the Plantation themed resources book which PRONI released last year.

Janet Hancock advised that a new secure invoice and payments system for remote enquiries is hopefully going to launch soon in late spring or in the summer. You will be able to pay for looks ups, do copyright declarations online, and gain digital access. We may get a short presentation on this at the next forum meeting.

PRONI's oldest document is a papal bull from the 13th century, concerning the creation of Paisley Abbey in Renfrewshire, Scotland, and held with the Hamilton Papers. This year sees its 800th anniversary, and there will be a tie in event on June 12th at PRONI with speakers Matthew Hammond and William Roulston.

(With thanks to all the forum members, especially Stephanie Routhier-Perry and Stephen Scarth for the visit to the multimedia room)

My next Scottish Research Online course starts March 11th 2019 - see www.pharostutors.com/details.php?coursenumber=102. Details of my genealogical research service are available at www.ScotlandsGreatestStory.co.uk. For my Scottish and Irish themed books, visit https://britishgenes.blogspot.com/p/my-books.html. Further news published daily on The GENES Blog Facebook page, and on Twitter @genesblog.
Posted by Chris Paton at 16:32