TheGenealogist has just released the Lloyd George Domesday Survey records for Tower Hamlets which cover land owners and occupiers in 1910-1915 with over 91,500 individuals recorded. These now join the previously released data books and their detailed associated maps for other parts of London, bringing the total number to nearly half a million individuals within this record set.

This new release is the latest phase of TheGenealogist’s extensive ongoing project to digitise over 94,500 Field Books, each having hundreds of pages, and linking them to large scale IR121 annotated OS maps which are now viewable in TheGenealogist’s powerful Map Explorer tool.

The records, which are sourced from The National Archives, were originally compiled by the Valuation Office in a period that stretched from 1910-1915 in response to Lloyd George’s government passing the People’s Budget 1909/1910. 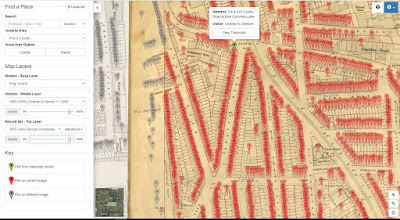 Family historians can use these records to:

Complementing the maps on TheGenealogist’s Map Explorer are the accompanying Field Books which provide detailed information relative to the valuation of each property, including the valuation assessment number, map reference, owner, occupier, situation, description and extent.

For family historians looking for ancestors’ homes just before the First World War in the Tower Hamlets area of London this recordset is invaluable.