Burial records from the historic West Norwood cemetery in Lambeth, London, are now available on www.deceasedonline.com. This beautiful cemetery, one of the 'Magnificent Seven' Victorian cemeteries, was founded in 1836 and is home to a great many listed monuments. The cemetery maintains a place in the English Heritage National Register of Historic Parks and Gardens, and is recognised as a site of nature conservation value within Lambeth. 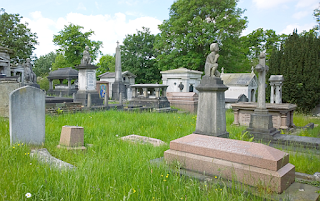 Among the notable famous people of the past buried in West Norwood cemetery lie John Dwight Doulton and his son Sir Henry Doulton. John Doulton, who died in 1873, was the founder of the firm that would become known as Royal Doulton. Originally the firm existed as a partnership with Martha Jones and John Watts, and was known as Jones, Watts, and Doulton. They specialised in industrial ware, brown stoneware, and stoneware bottles for liquid chemicals. Jones withdrew from the partnership in 1820 and, following the retirement of Watts in 1853, Doulton merged his company with his son Henry's company, Lambeth pottery, to become Doulton and Company. Henry's love of literature and the arts channelled the production of Doulton towards the manufacture of Art Pottery, for which Royal Doulton has become famous. Sir Henry was interred in a mausoleum at West Norwood cemetery made from red pottery tiles and bricks from the Doulton Works, and this has become a Grade II listed building.

Isabella Mary Beeton, author of the 1861 work Mrs Beeton's Book of Household Management, is also resting in West Norwood cemetery after dying in 1865 of puerperal fever at the young age of 28. Mrs Beeton worked extensively with her publisher husband, Samuel Beeton, revitalising the The Englishwoman's Domestic Magazine with Isabella listed as 'co-editress'. Mrs Beeton's Book of Household Management, a collection of 24 articles from the The Englishwoman's Domestic Magazine, became one of the major publishing events of the 19th century. It was immensely well received by critics of the time and sold over 60,000 copies in its first year. It is still in print today.

English architect and designer William Burges, among the greatest of the Victorian art-architects, rests in West Norwood cemetery in the tomb he designed for his mother. Burges was described by contempories as eccentric, over-indulgent, and unpredictable, but his sense of humour and lively conversation won him many friends. He was well known for his opium addiction and party-batchelor lifestyle, which some have speculated was at least partly responsible for his early death in 1881, at the age of 53. Burges left behind an incredible body of work in architecture as well as designs in metalwork, sculpture, jewellery, furniture, and stained glass. His most notable works include Saint Fin Barre's Cathedral in Cork, Cardiff Castle, Gayhurst House in Buckinghamshire, and the Church of Christ the Consoler in Yorkshire.

The 165,000 records available on Deceased Online cover 1837 to 2005 and comprise microfiche scans of the original burial registers, information showing the other occupants of the grave, and maps showing the grave's approximate location in the cemetery.

(With thanks to Deceased Online via email)

My next Scottish Research Online course starts March 11th 2019 - see www.pharostutors.com/details.php?coursenumber=102. Details of my genealogical research service are available at www.ScotlandsGreatestStory.co.uk. For my Scottish and Irish themed books, visit https://britishgenes.blogspot.com/p/my-books.html. Further news published daily on The GENES Blog Facebook page, and on Twitter @genesblog.
Posted by Chris Paton at 13:32