The General Assembly of the International Confederation of Genealogy and Heraldry (Confédération Internationale de Généalogie et d`Héraldique, CIGH) on Friday, 20.09.2019 in Antwerp, Belgium, elected Dirk Weissleder (50), Chairman of the German umbrella organization (DAGV), from Laatzen near Hanover, as its General Secretary. Weissleder, who heads the German umbrella organization for family history research (genealogy) and heraldry, succeeds the Russian Dr. Stanislav V. Dumin from Moscow, who was elected 3rd Vice President. Weissleder is the first German to hold the position of General Secretary of the World Federation.

The CIGH was founded in 1971 in Brussels as the worldwide umbrella organization of genealogical and heraldic associations and has its headquarters in Paris. The aim is the international exchange, networking and cooperation between associations and federations in the fields of genealogical-heraldic research and studies. Dirk Weissleder, who is at the same time 2nd Vice President and co-founder of the worldwide umbrella organization for German genealogy of the International German Genealogy Partnership (IGGP), said in his inaugural speech: "Genealogy and heraldry are currently facing undreamt-of challenges that are very similar worldwide despite all their differences. The question arises: Why do I need associations when I get "everything" on the Internet? And in addition, genealogy and heraldry often present themselves internationally as unconnected islands. This is a great opportunity to learn more with and from each other and to connect the individual players." He continued: "My term in office begins in a phase of upheaval and I am convinced that the future of genealogy and heraldry will be decided today and not sometime in the future". 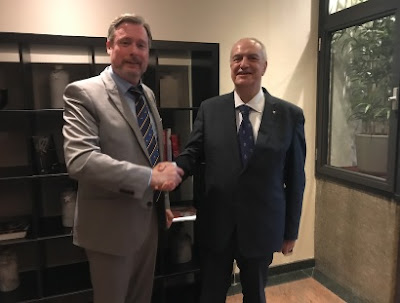 (With thanks to Dirk, and congrats!)