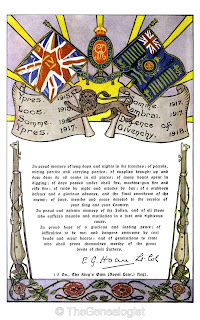 TheGenealogist has just released a set of 50 Regimental Records to join its ever-growing military records collection bringing its total coverage to over 70 different regiments. Researchers can use the collection to follow an ancestor’s regiment, discovering the battles they took part in and trace their movements. You can also find ancestors who were mentioned in the war movement diaries or listed in the appendices of men and officers of the regiment.

This release covers records from the 17th century in the earliest incidence, for The Ancient Vellum Book of the Honourable Artillery Company 1611-1682, through to the late 1920s for The King's Royal Rifle Corps Chronicle, 1927. There are also a large number of Regimental Histories that cover the First World War which can reveal some fascinating details for family historians tracing their ancestors in World War I.

Use these records to:

Order Tracing Your Irish Family History on the Internet (2nd ed) at https://www.pen-and-sword.co.uk/Tracing-Your-Irish-Family-History-on-the-Internet-Paperback/p/16483. My next Scotland 1750-1850: Beyond the OPRs course starts 4 November 2019 - see https://www.pharostutors.com/details.php?coursenumber=302. Further news published daily on The GENES Blog Facebook page, and on Twitter @genesblog.
Posted by Chris Paton at 12:42