We have a Christmas appeal from Who Do You Think You Are? magazine, if you can help!

A Who Do You Think You Are? Magazine reader is seeking the family of Robert and Margaret Raven to return their love letters

The love letters of a Second World War airman and his future wife have been rediscovered over 70 years later. 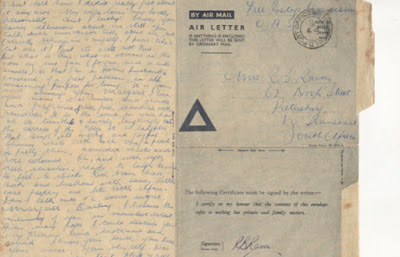 Now at Who Do You Think You Are? Magazine, we’re hoping to give the couple’s descendants an extra Christmas present by reuniting them with the precious documents.

The correspondence between Robert Raven and Margaret Blyth was bought as a lot by Bob Sheridan, a Rutland man interested in the history of the armed forces postal service and the postal marks on the letters.

But the letters revealed a moving story of lovers separated by wartime.

Bob and his friend Tracey Dene Powell researched Robert and Margaret in family history, immigration and RAF records, but have yet to find a living descendant to give the letters to.

“I know that if they were from my parents or grandparents, then I would treasure them forever,” Tracey told Who Do You Think You Are? Magazine.

The letters were exchanged between Robert Raven, a British airman, and Margaret Blyth (later Raven) from South Africa, as well as their family members, from 1941 to 1953.

For more on the story visit http://www.whodoyouthinkyouaremagazine.com/news/appeal-return-second-world-war-love-letters-couple%E2%80%99s-descendants


(With thanks to Rosemary Collins at WDYTYA? magazine)

Order Tracing Your Irish Family History on the Internet (2nd ed) at https://www.pen-and-sword.co.uk/Tracing-Your-Irish-Family-History-on-the-Internet-Paperback/p/16483. and Tracing Your Scottish Ancestry Through Church and State Records at https://www.pen-and-sword.co.uk/Tracing-Your-Scottish-Ancestry-through-Church-and-State-Records-Paperback/p/16848. Further news published daily on The GENES Blog Facebook page, and on Twitter @genesblog.
Posted by Chris Paton at 14:51