From Who Do You Think You Are? magazine (www.whodoyouthinkyouaremagazine.com):

Four projects have been chosen this year including projects transcribing West Midlands police records, Royal Navy service records from the First World War and German internees at a British internment camp. This year, FamilySearch are uploading a range of non-conformist registers specifically for Transcription Tuesday. Thousands of family historians took part last year and it is hoped that even more will join in this year for a global ‘transcribathon’.

Although most transcribers will be working from home, this year, for the first time, volunteers will be able to join others and get support in their work at various sites. The National Archives in Kew, Surrey, will be hosting the Royal Navy First World War project (free ticketed event) while the Internment Research Centre, based at the Heritage Hub in Hawick will be open to transcribers all day. Some Family History Centers will also be hosting Transcription Tuesday events. 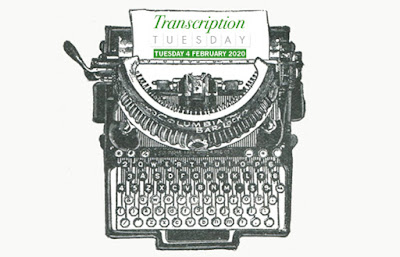 (With thanks to Sarah Williams)