Pen and Sword have kindly sent me through some family history titles to review, so here goes with the first! 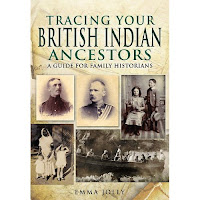 It was not that long ago that I discovered that I had a few connections to India. On the one hand, a cousin of my grandfather, Rev. William Paton, worked as a missionary there in the early 20th century, counting Mahatma Ghandi as one of many Indians with whom he would have regular dealings. More specifically to my own bloodline is my connection through my three times great grandfather Alexander William Halliday. Alexander's death entry in a military muster roll in 1866 pointed out that he had an Indian birth, but the person who found the actual birth record for me at the British Library was genealogist Emma Jolly.

Based in London, Emma lives and breathes British Indian research, and so as a prospective author for a title in the Pen and Sword "Tracing" series, there was no better candidate. As with other titles in the range, Emma's work very much focusses on how to get the best from the vast myriad of resources both offline and online that can help with the subject matter at hand. In that regard it is as competent as some of the best in the range, but the thing that I really like about this book is the fact that it did not just tell me about those resources, it also told me about the very history of British India itself, with some occasional and surprising gems. For one thing, I had no idea that Scotland temporarily tried to compete with the English East India Company in the east through "The Company of Scotland Trading to Africa and the Indies", which lasted just a few years from 1695 (have only just twigged that this was the same company behind the Darien disaster!) For another, the colonial connections of the British Empire to China and Africa become greatly crystallised when you realise how important the role of India was as the lynchpin of that empire. It's one of the few books that I've read where I actually understand that empire.

The book is structured across ten chapters. the first provides a solid overview of the key repositories and societies that can help with your research, from the British Library and the National Library of Scotland to the Families in British India Society. The next three chapters are where the fun really begins with a comprehensive overview of the history of the East India Company and the subsequent Raj. Chapter 5 sees a full discussion on the research of military forces, both raised locally and dispatched from Britain (with Alexander Halliday and his father William making a guest appearance on p.72!). Subsequent chapters deal with maritime industries and merchants, schools, religion, the railways and more. Chapter 9 has a helpful guide to probate research in India, whilst the final chapter deals with India after 1947, and the end of the British Empire.

A thoroughly solid and enjoyable read from start to finish, this provides both a definitive history for beginners and a comprehensive family history guide for all to the greatest asset of the former British Empire.

(With thanks to Pen and Sword)