I got home at 11pm last night after two great days in Dundee. On Friday I did some client research at Dundee Central Library in the Wellgate Centre and then at Dundee City Archives. Whilst managing to achieve a great deal at both, it was the first time I had used both institutions. In particular I had a lot of time for the archives and the staff there, who helped me to achieve an unbelievable amount in the short time I had, from various records of customs and excise staff. I look forward to future visits to both institutions.

Yesterday, however, was the annual SAFHS conference (www.safhs.org.uk), which was once again a thoroughly enjoyable event - a chance to catch up with many friends and to hear some great lectures. The venue was the University of Dundee, with the main vendor and FHS stalls set up in the Bonar Hall, and the lectures in a small theatre in the building next door. I attended all of the talks in the morning, and then spent the afternoon catching up with various people.

The lectures I attended were a fascinating mix. Ron Scrimgeour gave a talk on the Nine Trades of Dundee and the weaver calling in particular, which I was extremely interested in, having previously studied the same industry just further down the Tay in Perth. It was great in particular to learn more about the jute industry in the city, and its connections to India, and how it came to prominence as a result of Napoleon's trade blockade in the early 19th century. Incidentally, I learned later in the day that the records of the Weavers Incorporation of Perth, which I photographed a few years ago, and which I am currently transcribing, have finally been deposited with Perth and Kinross Archives - they are a wonderful resource, so if you can't wait for me to finish, you can now get direct access at the archive (although it is temporarily closed for refurbishment for a few weeks)!

Bruce Durie also gave an interesting talk on the detective stories of Dick Donovan, aka JEP Muddock, a story I was partly familiar with having studied the Muddock family as part of the Strathclyde University course I did a few years back. A lot of interesting discussion on how Conan Doyle's Sherlock Holmes was not the start of the detective genre, some interesting connections to Dundee and also the painter Edvard Munch. In his introduction Bruce also mentioned that he would be going to Dundee a bit more in the future, as he will apparently be involved in the University of Dundee's genealogy postgraduate programme.

My favourite talk of the morning though was by Professor Geoff Squire (see pic below) on crops and their development and use in the 1700s and 1800s. It was a great presentation discussing how various crops were used and introduced - e.g. the development of legumes became more prominent when it was realised they fixed nitrogen in the soil - and how the agricultural revolution fitted in with other developments in Scotland such as industrialisation. A great presentation.  For those unable to attend, I tweeted throughout with some of the key points, which can be read at my twitter page at www.twitter.com/chrismpaton 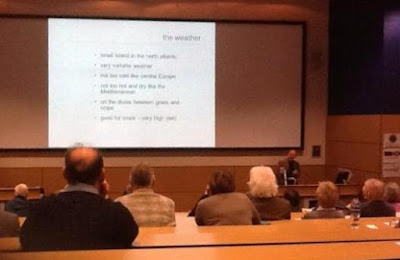 After a good feed of soup and sandwiches I then spent the afternoon talking with a few folk. Several family history societies that I have given talks at were present, so many familiar faces (and great to see the societies from Troon and East Ayrshire had travelled as far as I had!), and also some other folk from the industry, such as Alison Wallace of Brightsolid, looking radiant after recovering from a recent illness, the effervescent Karen Nichols of Scotia Heritage, my former Strathclyde course tutor Graham Holton, Ken Nisbet from SAFHS, and the ever energetic Helen Grant from Scottish Monumental Inscriptions. I also met a couple that I had previously met in a pub in London two years ago at Who Do You Think You Are Live, a former Pharos student, and many others. The event itself felt a wee bit quieter than recent years, on a par with last year perhaps, but perhaps a bit down in numbers on the previous, but nevertheless a fun day.

In the evening I went for a few drinks and a meal with fellow genies Chris Halliday, Marie Dougan and Ali MacDonald, a great chance to discuss the issues that we find facing us just now as full time professional genealogists, as well as to have a bit of a laugh and a catch up. Some exciting times ahead on various fronts!

Final thanks though to whoever organised the raffle and the goodie bags. On the goodie bags front, the addition of a wee jar of maramalade was inspirational, as was the inclusion of a small booklet on the history of the Dundee customs and excise men (which I am currently researching for a client), but I was also a winner at the end of the day - in the raffle I won salt and pepper shakers and some flowery notepaper. Sadly nothing fermented though, but I'm hoping my streak of luck continues at the event next year! 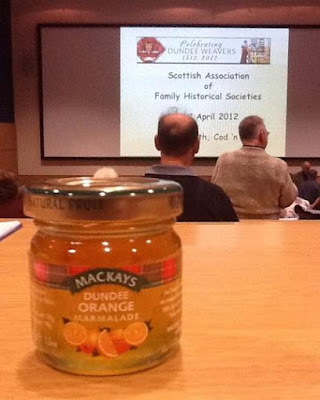