Here's one for my local patch of Ayrshire :)

I had the great pleasure to spend a day doing client research at the Burns Monument Centre (www.burnsmonumentcentre.co.uk) in Kilmarnock on Wednesday. Whilst here I consulted several burgh registers from the 18th century for a particular case, but I was also able to use the newly provided access to the ScotlandsPeople Centre computer system, i.e. that used in Edinburgh, not the online site. I recently blogged that this is now available in the Mitchell Library in Glasgow, but Kilmarnock now also has access. 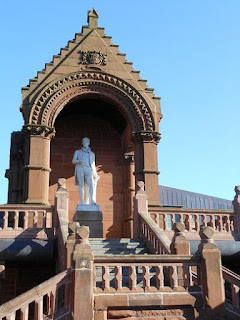 The set up for computer access in Kilmarnock is much the same as Edinburgh and Glasgow, with a £15 fee for unlimited consultations in the records for a day, though with a few differences. As with Glasgow, there is no online access to the Roman Catholic records that are available at the ScotlandsPeople Centre or online (for licensing reasons), whilst the records of coats of arms are also unavailable - something I had not twigged at Glasgow (which probably says much about how often I use them for genealogical research!).

The opening hours in Kilmarnock are as follows:

Print outs are only 10p, and the place was not busy when I was there, providing for a really relaxed research environment. I actually flitted between both the computer suite and the archives a couple of times - in adjoining rooms - and it worked wonderfully.

Just a quick word on the archives also. It is a bit confusing for Ayrshire, as we have three authorities - East Ayrshire (where Kilmarnock is based), South Ayrshire (where Ayr is located) and North Ayrshire (where Saltcoats is based). There are separate archive facilities in each, but Ayrshire Archives (www.ayrshirearchives.org.uk/ArchivesCentre.asp), based in Auchincruive, acts as an umbrella authority for them. There have been all sorts of closures and openings across the county, such as the Vennel in Irvine going and a centre at Saltcoats recently being set up. I spoke to Pamela McIntyre from Ayrshire Archives (who visits the Burns Centre on Wednesdays) and she suggested that basically the best advice if you have Ayrshire connections is to touch base with the Auchincruive centre first, and then be guided to the relevant repositories from there. There is some degree of cataloguing for Ayrshire collections on the SCAN website (www.scan.org.uk) but because of recent changes, and ongoing work to continue cataloguing, not everything may be online or indeed accurate (if relocated from one repository to another, for example) - hence the advice.

But definitely a wonderful facility in Kilmarnock, and as well as to Pamela, thanks also to Heather and Marie for help during the day. And I should add, there were lightning fast production times for document requests! :)