In late 2009 I was invited to go on a ghosthunting event at Inveraray Jail in Argyll by a tour operator. I wrote up my escapades for two magazines, a short piece for Scottish Memories, and a longer piece for Discover my Past Scotland. As we get closer to Hallowe'en, here's the article from DMPS (with a couple of links updated) - enjoy!

A few years ago a discussion was aired in British genealogical magazines about whether the use of mediums was a valid tool for family history research. Personally speaking, I don’t believe in ghosts at all and am a complete sceptic, so have never paid attention to any of this in a professional capacity. 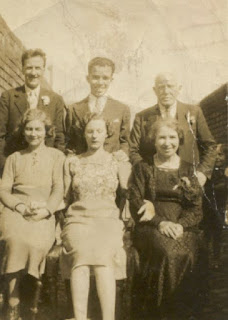 I should add, though, that this actually flies in the face of family tradition! In my mother’s paternal ancestry, the Grahams were members of a spiritualist church on Belfast’s Shankill Road. My two times great grandfather, Edwin Graham (see pic on right - he's on the back row at the right), was in fact the secretary of the Ulster Christian Spiritualists Society and rather dramatically made the newspapers across the UK in 1926 when he organised an experiment in Belfast City Cemetery to photograph a funeral, inviting well over a hundred spiritualists to bring their cameras along to take photographs as the deceased was lowered into the ground. Edwin believed that it might have been possible to capture images of other spirits in attendance, and a press report later claimed that he had been convinced that he had seen the ghost of his brother at the graveside. I have no doubt Edwin must have seen a spirit of some kind on that day, though whether we are taking the floaty, spooky kind is in my mind very open to question.

Nevertheless, having said all of that, I dearly want to believe that there is something true about the paranormal. After all, wouldn’t life be just ever so much more exciting? My wife and I regularly watched the television series “Most Haunted”, myself as an enthusiastic sceptic – how did they do that, what could have caused that noise? – and my wife with a view that there could be more to it than meets the eye. So it was with a great deal of enthusiasm that we recently took up an invitation from Ghost Events Scotland (www.ghostevents.co.uk) to attend one of its ghost hunting vigils at Inveraray Castle.

Coincidentally, “Most Haunted” had actually visited both Inveraray Jail and the town’s nearby castle just a few weeks prior to our invitation, recording all sorts of apparent poltergeists and spooks. The Ghost Events Scotland night would be a similar sort of endeavour, with séances, Ouija boards, and a friendly medium to guide us around. Would things truly go bump in the night - or would we just keep bumping into things? 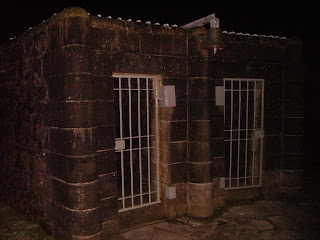 Located on the shores of Loch Fyne in the heart of Campbell country, Inveraray Jail was first opened for business in 1820 as a prison of eight cells, where both male and female criminals, and debtors, could be locked up after a trial in the adjacent courtroom. A new prison block with a further twelve cells was opened in 1848, and the whole operation continued until 1889 when it was finally closed. Having been to the prison several times before, it was never hard to imagine the horrendous lives of the prisoners who resided there. From a genealogical point of view, the museum also provides many useful resources for family historians, not least of which is its online database of prisoners located at http://www.inverarayjail.co.uk/our-history/, providing information on those convicted, their crimes and in some cases details of transportation, though it does not provide case notes for any of those said to still be haunting the place! Prisoners faced a gruesome time within, having limited facilities, poor food, a small courtyard for exercise, and the occasional whipping with the birch. 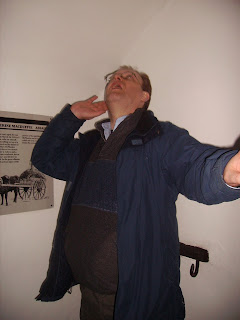 Arriving at the Jail at 10.00pm on the Saturday evening of the event, we were hastily gathered into a room for a briefing on the forthcoming six hour vigil, which initially started with some ‘training’. This was in the form of acquiring ‘protection’ against any prospective baddies out to get us through the vigil, mainly by imagining some sort of white light around us – an interesting start, I thought. We were divided into two teams, and our team, led by a lady called Linda claiming to be a medium, was soon being escorted to the prison’s new block.

Once inside, with all the lights switched off, Linda apparently began to sense the spirits of a John and Hugh Campbell pacing up and down their cell. They seemed fairly quiet to me, so instead I began to wonder what life must have been like each night for the prisoners, particularly in the winter with its short daylight hours. It was minus eight degrees outside, and not much warmer inside. As we left the ground floor, Linda announced that we were now being followed by a violent sheep stealer called Robert Stewart. Not one for having my sheep stolen, I quickly moved upstairs with everybody else. (In fact, a consultation of the database after the event did reveal that a person of that name from Glencoe was imprisoned in 1855 for 15 months for sheep stealing from three farms.) 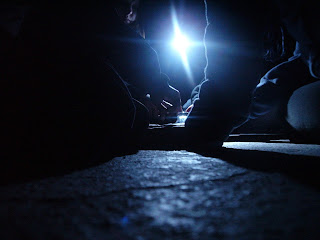 In an upstairs room, we were then asked to try to talk to spirits using a Ouija board. People get awfully spooked by Ouija boards, but not being a believer in the paranormal, I did not worry about having a go! I duly stuck my finger firmly on the glass, and after several minutes I was soon receiving the message loudly and clearly that my finger was getting very cold, but nothing more. Clearly 19th century prison discipline must have worked, because none of the spirits there were attempting to say boo to a goose.

But what about the notorious cell ten? A malevolent spirit was said to physically throw people from the single hammock fixed to its walls. We were all asked to squeeze in and a volunteer was asked for to lie on the bed. Too good an opportunity to put my feet up for a few minutes, I duly volunteered. I was surprised at how comfortable the bunk actually was, but sadly surprised by nothing more. I have to concede though that there is something distinctly surreal about lying on a bunk with ten people standing around you in the pitch black waiting for you to be violently attacked.

After swapping Linda for the organiser’s parapsychologist, we then proceeded to do an ‘EVP’ experiment. This involved asking three questions into a voice recorder, and leaving gaps in between. Once played back, some weird noises did emerge in the gaps. Some believed that these were spirits trying to break through, but I was not at all convinced. 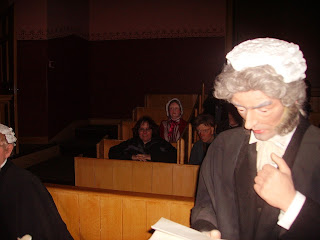 The final event of the night, once again with Linda, was a visit to the court room. In total darkness we had to perform a role play, apparently seeing a trial underway may have excited spirits to come out and play! So rather bizarrely I suddenly found myself as the judge, standing beside the mannequin of the museum’s judge, sentencing some poor wee woman I had never met before in our team for having stolen her neighbour’s dog (I should add that no animals were harmed in the making of this production!). A séance was then held in the middle of the room. As one of the party excitedly yelled out “I challenge you in the name of God, and even he who cannot be named, to show yourself!”, my wife, a big fan of the Harry Potter books, looked to me and said “Who, Voldemort?”

So was it worth the visit? For me, nothing spooky happened, and as my wife put it, she went in a believer and came out a sceptic. But it was most definitely worth it to be allowed a free run around the museum and to experience it in a way that one normally cannot get the chance to. It was also a lot of fun. Would I go again? Definitely! And those ghosts know that this arrogant, sceptical genealogist has yet to be broken - they have as yet got everything to play for...!

UPDATE: Here's that Most Haunted episode in Inveraray - boo!

My next 5 week long Scotland 1750-1850: Beyond the OPRs course commences Nov 6th 2017 - details at https://www.pharostutors.com/details.php?coursenumber=302. For my genealogy guide books, visit http://britishgenes.blogspot.co.uk/p/my-books.html, whilst details of my research service are at www.ScotlandsGreatestStory.co.uk. Further content is also published daily on The GENES Blog Facebook page at www.facebook.com/BritishGENES.
Posted by Chris Paton at 00:05