Ancestry (www.ancestry.co.uk) has again updated its ethnicity projections for those who have taken DNA tests, due to an expanded reference panel. From the news release:

Consumer genomics is a new and evolving field and Ancestry® is at the forefront, constantly developing new ways for you to learn about yourself through DNA. Today, we’re proud to announce that our team of scientists have increased the AncestryDNA® reference panel to more than double its previous size with samples from more places around the world, resulting in the latest update to AncestryDNA ethnicity estimates.

Over the next several months, AncestryDNA customers may receive updated ethnicity estimates, thanks to our expanded reference panel, which allows us to determine ethnic breakdowns with a higher degree of precision. This means there may be some changes to your results.

For example, previously we had North and South America as two large regions: Native American–Andean and Native American–North, Central, South. With this new update, we are able to refine the areas into 11 smaller ones. If you received one of the older regions before, your new report will most likely have one of the newer, more precise regions instead like Indigenous Eastern South America, Indigenous Cuba, and Indigenous Americas–Mexico, among others.

While not common, some customers may also lose a small percentage region as a result of this update. One way this can happen is if that ethnicity has been re-assigned to a nearby region. This is because people from neighboring areas tend to look similar genetically. For example, some people with ancestors from southern Italy will lose their small amount of Turkey/Armenia and possibly gain a bit of Near East instead.

The full announcement is at https://blogs.ancestry.com/ancestry/2019/10/21/ancestry-expands-reference-panel-to-deliver-more-precise-results-and-new-regions/, whist a list of the categorised regions now available to Ancestry's DNA customers can be found at https://support.ancestry.com/s/article/List-of-AncestryDNA-Regions

COMMENT: My own DNA page has advised that there was an update, but for me it does not seem to be drastically different to what was previously there. 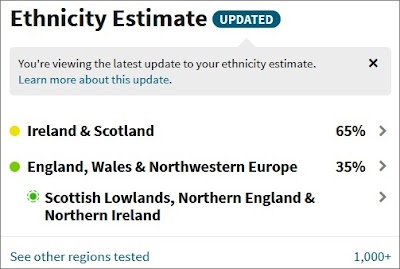 Order Tracing Your Irish Family History on the Internet (2nd ed) at https://www.pen-and-sword.co.uk/Tracing-Your-Irish-Family-History-on-the-Internet-Paperback/p/16483. My next Scotland 1750-1850: Beyond the OPRs course starts 4 November 2019 - see https://www.pharostutors.com/details.php?coursenumber=302. Further news published daily on The GENES Blog Facebook page, and on Twitter @genesblog.
Posted by Chris Paton at 13:57