This edition features a diverse range of articles from some of the top names in Irish genealogy. 2019 will be the year of poitín for Irish Lives Remembered as we're delighted to have a major four-part series on illicit whiskey making in Ireland. Part three available now. 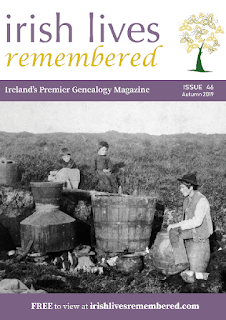 Order Tracing Your Irish Family History on the Internet (2nd ed) at https://www.pen-and-sword.co.uk/Tracing-Your-Irish-Family-History-on-the-Internet-Paperback/p/16483. My next Scotland 1750-1850: Beyond the OPRs course starts 4 November 2019 - see https://www.pharostutors.com/details.php?coursenumber=302. Further news published daily on The GENES Blog Facebook page, and on Twitter @genesblog.
Posted by Chris Paton at 21:40