The Bureau of Military History website, from the Republic of Ireland's Defence Department's Military Archives (www.militaryarchives.ie), has finally gone live at www.bureauofmilitaryhistory.ie. The Bureau was established in 1947 'to assemble and co-ordinate material to form the basis for the compilation of the history of the movement for Independence from the formation of the Irish Volunteers on 25th November 1913, to the 11th July 1921.'
As a record of how one part of the United Kingdom broke away to form its own self-governing nation some ninety years ago, it is a truly extraordinary online resource, and all credit to the Department of Defence for making it available online. 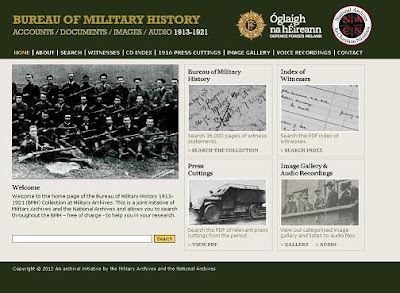 Check out my Scotland's Greatest Story research service www.ScotlandsGreatestStory.co.uk
New book: It's Perthshire 1866 - there's been a murder... www.thehistorypress.co.uk/products/The-Mount-Stewart-Murder.aspx (from June 12th 2012)
Posted by Chris Paton at 12:57