From the Imperial War Museum at Duxford (www.iwm.org.uk):

Our February half term activities share stories from our collections about the people and the equipment that won the Second World War.

Daily, from 10.30am to 2.30pm, we’ll be marvelling at the impressive Avro Lancaster in our AirSpace exhibition and finding out about the bombing campaigns carried out by this type of aircraft. We’ll discover how the Lancaster works, the crew it carried and the role each played in a bombing raid. You’ll see, touch and try on items of uniform worn in the Lancaster bomber and find out about the experiences of the young men who flew in these remarkable aircraft. We’ll be hosting talks about our legendary Lancaster at 10.30am, 11.15am and 12pm. Hold and handle equipment and uniforms from the Lancaster bomber between 10.30am and 2.30pm.

From 10.30am to 2.30pm, we’ll be making aircraft-themed key-rings for school bags under the vast wings of the supersonic Concorde in AirSpace.

Montgomery was commissioned in September 1908 into the Royal Warwickshire Regiment. In 1914 he went to France and saw action in the early months of the First World War. He won the Distinguished Service Order for leading a bayonet charge at Meteren, near Ypres, on 13 October 1914, but was wounded in the chest and knee later the same day. He returned to France in 1916 and held staff appointments for the remainder of the war.

Between the wars, Montgomery gained a reputation as an outstanding trainer of troops. In 1938 he briefly commanded the 8th Division in Palestine and in 1939, less than a week before the outbreak of the Second World War, he took over the 3rd Division, which was destined to go to France to fight the Germans.

One of the most famous military commanders of the Second World War, it was ‘Monty’ who accepted the surrender of all German forces in Holland, North West Germany and Denmark, leading to Victory in Europe.

Land Warfare is home to the Monty exhibition which features the three campaign caravans in which Field Marshal Montgomery lived, worked and planned campaigns. They are exactly as Monty left them at the end of the Second World War. 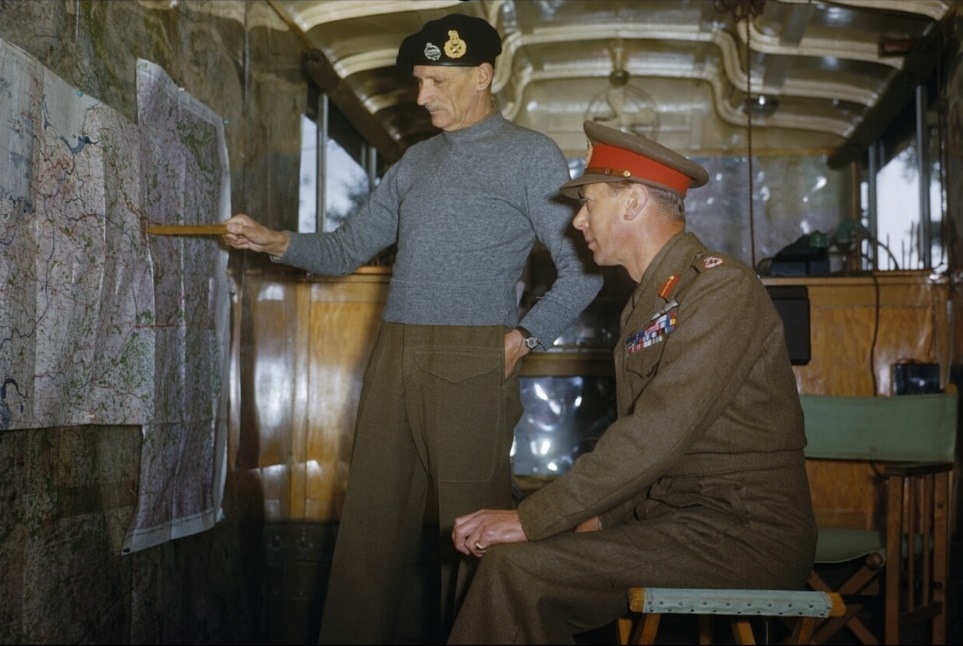 Monty’s map caravan was the centre of his tactical headquarters from June 1944 until May 1945. Here, he received daily reports of developments at the battle front from his team of Liaison Officers. Maps showing the daily progress of the armies under his command were hung on the walls of the caravan, which was also equipped with telephones so that he could speak directly to his generals. Monty was working on the large map in this trailer when the Germans came to his headquarters to surrender on 4 May 1945.

Of his bedroom caravan, Monty said: “I would turn out of this caravan for only two people – the King, George VI, and Winston Churchill.” It was his living quarters from May 1943 until the end of the war and is equipped with a bed, wardrobes, a washbasin and a bath. Monty’s bedroom caravan was captured by the British 8th Army from Italian Field Marshal Giovanni Messe in May 1943. It had also been used by Monty’s great adversary Field Marshal Rommel.

It was on the steps of his office caravan that Montgomery introduced himself to his staff when he arrived in North Africa to command the 8th Army on 13 August 1942. The portraits of the German Generals that can be seen in this vehicle adorned the walls during Monty’s campaigns.

In a later interview, Monty said: “I used to look at the photograph of the general I was up against at the moment and try to decide what sort of person he was and how he was likely to react to any moves I might make against him. In some curious way this helped me in the battle.”

In the foreground of these historic vehicles, we’ll follow Monty’s battle plans for El Alamain, the crossing of the Rhine and the surrender of the German forces and work out how his strategy was so successful.

At 12.30pm, our history interpreter, dressed as a member of General Montgomery’s 8th Army, will explore the battle of El Alamain. He’ll start by showing you Monty’s tank and caravans, looking at the markings, designation and purpose of each vehicle. We’ll then move to a recreated map table to discover how Montgomery planned out his military strategies and tactics. Using a map, flags and models, we’ll follow Monty’s plan and find out how it led to victory in Africa.

At 1.30pm, we’ll discover Monty’s strategy for the crossing of the Rhine and how his caravan-based tactical headquarters contributed to his success in this campaign.

At 3pm, we’ll see how Montgomery accepted the surrender of the German forces and find out how terms were carefully negotiated before the surrender was publicly announced, ending the Second World War in Europe.

February half term activities are included in general admission to the museum.

(With thanks to Esther Blaine at the IWM)

For details on my range of genealogy guide books please visit http://britishgenes.blogspot.co.uk/p/my-books.html. To commission me for genealogical research, please visit my research site at www.scotlandsgreateststory.co.uk.
Posted by Chris Paton at 16:17