Another frustrating day at the National Records of Scotland

I spent another frustrating day at the National Records of Scotland (www.nrscotland.gov.uk) yesterday, trying to carry out research as much despite the facility as well as because of it. 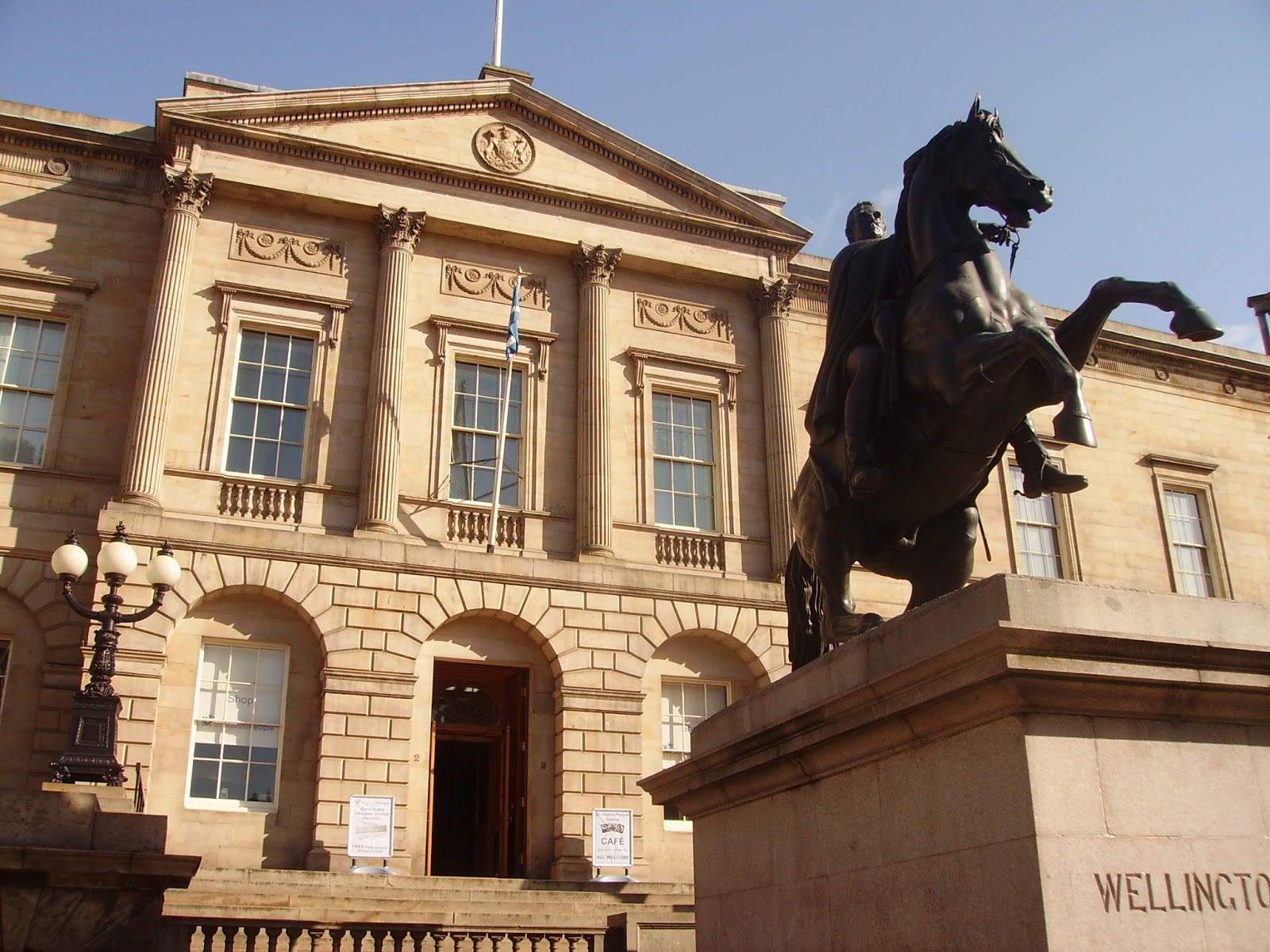 My morning in fact went quite well. I successfully managed to carry out some work in the ScotlandsPeople
Centre (www.scotlandspeoplehub.gov.uk), before relocating to the Historic Search Room upstairs to look at some 18th century estate records. For the first couple of hours all went well - a document I had ordered in advance was there, and although part of a GD collection (Gifts and Deposits), it was one that I was allowed to photograph. The first problem really hit at about 1pm. In another GD collection, I found five references within a rental roll, which was in the form of a book, and I wished to have them copied - although you can't copy with your own camera, they offer a facility to do copies for you (I won't go into the crazy pricing system here, other than to say that in this case it would have actually worked in my favour). The book was very easily opened and did so completely flat, so I wasn't expecting any problems. Except, when I asked to make copies from it, I was told no - there was a minor tear on one page apparently, and so I was told their copier would not take it. I asked if that was the case, could I take photos from the book instead to compensate, and was again told no.

Now I had already transcribed the entries, but this wasn't the issue. The spelling for some place names can be distorted in older documents, and not easily recognisable, not to mention the issues with handwriting. In some cases a place that is not immediately recognisable may suddenly become apparent in the consideration of other documents - hence the need for a copy of the original. In this case, a document that was fit for production, and which under the NRS own rules could be copied, albeit by the NRS itself, could not be copied, because their machine can't handle it - and as I'm not allowed to do so, I can't get a copy. So, if you take the logic of this further, a document that was claimed to be too frail to copy, despite being fit to produce, can only be further considered by ordering it up again, and again, and again. So if it is 'frail' now, what will it be like after the next ten people have handled it? The NRS has a rostrum stand in the search room - why can't it have a cheap digital camera on standby as a back-up for just such circumstances where it retains copyright of any generated digital image? By comparison, here's the self-service scanner facility PRONI offers which can easily deal with such circumstances at just 30p per digital copy... 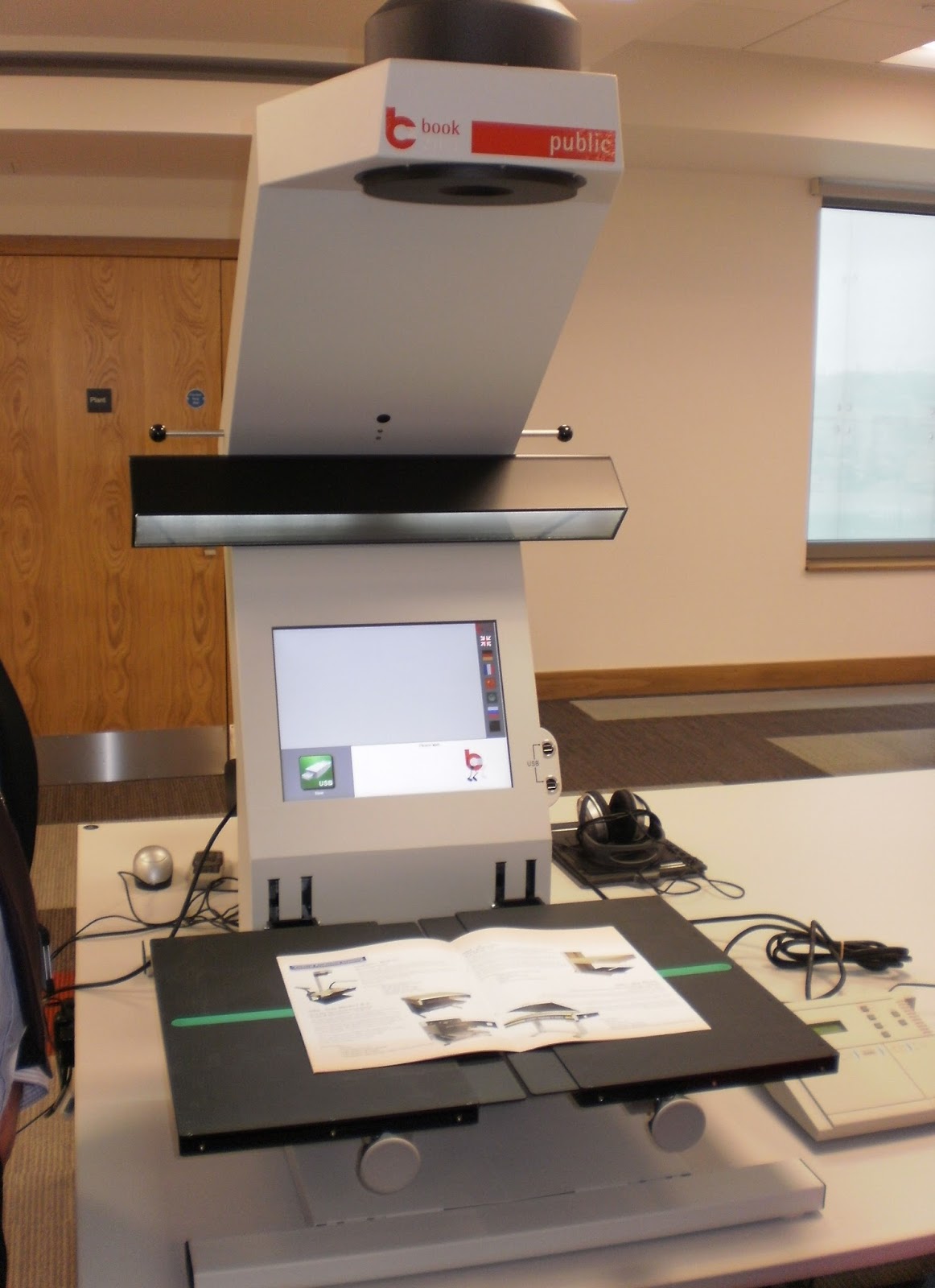 The only restriction with this machine at PRONI tends to be with large unwieldy documents (such as a large folded map, for example, which can be a monster to tame to get under the camera!).

But this was a minor inconvenience compared to the key frustrating issue. At about 2pm I ordered three documents up, and sat to wait for them. At PRONI and TNA, you can return a document at a time and order a new one in its place, with several orders coming and going all the time, so that if you have many documents there will always be one being fetched for you as you consult another - particularly handy if you have a lot to get through. At NRS, you have to order three at a time, and you can't do anything until they arrive in each batch. It doesn't matter if you return one at a time, no-one will fetch the next batch of three until all three are consulted. The NRS advises that it may be up to half an hour before productions arrive, but usually they arrive in about 10 minutes or so. After half an hour, with no sign of them arriving on this occasion, I went to the main desk and asked if they were on their way? The attendant looked at the computer and then told me that the computer said I still had a document out. I didn't - all had been returned. "We'll have to put the order in manually then" I was told - before having to wait another 10 minutes for it to arrive. After forty minutes waiting, they eventually arrived.

I finished looking at these documents, and then placed another order for three productions. It was now just past 3.30pm, and these were the least important of the records I had previously identified before my visit, so these were more a last minute consultation in the unlikely chance that they might yield something, rather than crucial 'must-see' documents. At 3.45pm there was no sign of them, so I thought I would check via the ordering computers to make sure that the order had gone through this time. Both of the 2 computers allowed for this were being used, so I waited, hoping one would become free. At 3.55pm, with no production and no free seat at the ordering terminals, I once again went up to the desk. At this point I noticed one of the productions I had previously returned was still sitting on the returns desk, so now biting my lip, I again asked if the orders were on their way? What then followed was a comedy of errors. One attendant told me that it was likely they were on their way, but the computer was down, another told me he couldn't check as he was locked out of his computer, the person who could check was away, and so on. After a couple of minutes watching this dithering, completely exasperated, I asked for my ticket back, and picked up my stuff and left, before I said something I shouldn't.

A few days back the NRS announced its core property strategy review, stating that in due course it intends to set up a new purpose built facility, but that is a very long way away (there is more about this in my new podcast at https://soundcloud.com/chrismpaton/british-genes-podcast-01-27-feb-2015). I have on many occasions publicly complained about the increasing problems at NRS being caused by storage issues, with records increasingly being stored off site on the other side of town and unable to be produced on the same day. That was a refrain I heard several times yesterday from staff to folk sitting around me asking if they could obtain a document "Stored off site, 24 hours notice", "Stored off site, 24 hours notice", "Stored off site, 24 hours notice". On one occasion yesterday I nearly jumped when a person sitting near me was told that a document he was told was unavailable earlier in the day, which would have to be ordered for a next day visit, had in fact suddenly arrived in the afternoon - he was luckily able to get access to it by chance, not by design.

But a new building to deal with storage problems is a separate issue to the archaic establishment of the current archive practice and facilities itself. NRS needs to buck itself up, and start to look at what can be done to provide a good service for its users, and not what just suits itself and its own long, tired, rusty and jurassic practices. Last Friday and this Monday the search room was in fact closed because it was "undertaking a significant computer system upgrade". I saw no evidence of this yesterday - the computer used to order documents took from a tedious 30 seconds to a minute at a time to return any data input into it for document productions, and the ordering system itself failed twice, causing me an unnecessary additional wait for productions. When you have to travel eighty miles to get to the facility, time really does mean money.

There is no point in having an archive that will not facilitate access to the very documents that need to be preserved. The most wonderful building, a historic location that is convenient to access, superb cataloguing and expert conservation - all of these don't count for anything if, at the end of it all, you cannot view what you actually go there to see in the first place.

For details on my range of genealogy guide books please visit http://britishgenes.blogspot.co.uk/p/my-books.html. To commission me for genealogical research, please visit my research site at www.scotlandsgreateststory.co.uk.
Posted by Chris Paton at 11:48