Thanks to Pen and Sword for a review copy of an immensely useful DNA book: 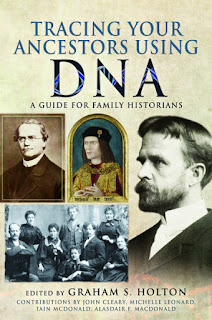 DNA is the family history tool that took me some time to embrace, and to grow to love. Having started with taking a Y-DNA test over a decade ago, I have had no hits of any significance since then, and so after an initial interest I placed the field to one side and continued to rely on documentation alone. The rise of autosomal DNA testing in recent years, however, utterly transformed my perception of the usefulness of DNA in genealogy, and in many cases has revolutionised and complimented my own research.

There are many useful DNA guide books out there, not least Blaine Bettinger's essential The Family Tree Guide to DNA Testing and Genetic Genealogy, but this new book by some of Scotland's finest genetic genealogists is a real up to date tonic for those trying to get to grips with all aspects of the field. Despite the numerous contributors, it comes across with a consistent voice when conveying knowledge to the reader, a good testament to the editing skills of Graham Holton.

After an introduction from Graham, and then a team effort asking why we should use DNA testing for genealogy, the book gets stuck into an absorbing offering from John Cleary on the ethical and legal aspects of genetic genealogy, citing interesting cases involving confidentiality, such as a recent inheritance case involving the Pringle baronetcy (see http://britishgenes.blogspot.com/2016/06/dna-evidence-resolves-baronetcy.html), and privacy, for example with the controversial use by law enforcement agencies in the USA of DNA databases created by the family history community.

Well known Glasgow based genetic genealogist Michelle Leonard then gets a clear run to explain the basics of all types of DNA tests - Y-DNA, mtDNA, and autosomal & X-DNA - followed by a chapter on autosomal (atDNA) tests. In this she may have helped to resolve a problem I have been struggling with in recent weeks to do with results that I exported from AncestryDNA into MyHeritage, GEDMatch and FamilyTreeDNA. I am showing a match in the last three databases with a friend in Australia which Ancestry itself is not showing up, despite it being sourced from Ancestry's own test results. I was unaware of the Timber algorithm which Ancestry uses to remove certain matches known as 'pile ups', which may well explain why we are not connecting, and which will need a bit more investigation at my end! The discussion of X-DNA matches is also something I found of interest, and something for me to take a look at in more detail over the weeks and months to come.

In partnership with John Cleary, Alasdair MacDonald examines Y-DNA testing, something I know he has had considerable success with himself, in a chapter which is a bit more technical but comprehensive, and which points the way to the future with foreshadowing of new processes such as Whole Genome Sequencing and 'Single Molecule Real Time Sequencing'. Ali's considerably shorter chapter on mitochondrial DNA helps to illustrate that whilst this will likely never be a more mainstream test (due to the slow mutation rate of mtDNA), it still has its uses, as with the recent use of mtDNA to confirm the found remains of the English king Richard III in a Leicester car park. A further chapter on how to choose between different testing companies is fairly brief, providing a series of questions to ask of each platform without focussing too much on the unique offerings from each.

John Cleary and Iain McDonald then discuss how to set up DNA projects, including a useful discussion on GEDMatch.com and the role of project administrators, with the duo then joined by Graham Holton in a follow up chapter on using an integrated approach to DNA testing through a combination of test types. In fact, I was unaware of FamilyTree DNA's Advanced Matches tool prior to reading this chapter, and whilst I have yet to come across matches who do match on more than one test, I will certainly be keeping an eye out on this in the future.

John Cleary's chapter on Ancient DNA is an interesting read, and whilst not an area that perhaps most of us will ever venture into, it does discuss the contemporary Fromelles First World War Dead project which sought to identify the remains of many Australian and British soldiers found in a war grave from the conflict, and the techniques used to identify them. A concluding chapter from Iain McDonald and Michelle Leonard looks to the future, and to what we might expect to see as genetic genealogy advances in the coming years. A glossary and further reading section complete the offering.

This is an excellent and well illustrated book with much to offer both to those dipping their toe into the water for the first time and to those who already have some considerable experience. Despite being a little jargonistic in parts (because there really is a lot of jargon in DNA!), it nevertheless succeeds in staying on the right side of the line in keeping the reader focussed and on top of what is being discussed.

Overall, Tracing Your Ancestors Using DNA is an indispensable guide from a team that knows its stuff, and a book which I would thoroughly recommend.

Tracing Your Ancestors Using DNA: A Guide for Family Historians is available to purchase form Pen and Sword at https://www.pen-and-sword.co.uk/Tracing-Your-Ancestors-Using-DNA-Paperback/p/16347.

Pre-order Tracing Your Irish Family History on the Internet (2nd ed) for just £11.99 at https://www.pen-and-sword.co.uk/Tracing-Your-Irish-Family-History-on-the-Internet-Paperback/p/16483. Details of my genealogical research service are available at www.ScotlandsGreatestStory.co.uk. Further news published daily on The GENES Blog Facebook page, and on Twitter @genesblog.
Posted by Chris Paton at 17:08