This is the tragedy that should not have happened. Birth, marriage and death records at the National Records of Scotland have been damaged by flooding last week, as heavy rain leaked through the New Register House dome. You can read the shocking story at https://www.bbc.co.uk/news/uk-scotland-edinburgh-east-fife-49164095 and at https://www.scotsman.com/news/leaking-dome-at-national-records-of-scotland-causes-massive-damage-to-precious-historical-documents-1-4973084.

I have long argued that the NRS building in Edinburgh is not fit for purpose. It might look pretty, but I'm not looking for pretty, I'm looking for functional, and many records are not held on-site. A 19th century building has many shortcomings in the 21st century. You can read my take on this at http://britishgenes.blogspot.com/2014/11/more-on-national-records-of-scotland.html, from a blog post in 2014, when the NRS announced its Estates Review.

The subsequent findings of that review were announced in 2015, which I again blogged about at http://britishgenes.blogspot.com/2015/01/national-records-of-scotland-estates.html. At this point, I was advised of the following:

"Our long-term aspiration is to co-locate the majority of our staff in a fit-for-purpose facility in Edinburgh, and to expand and improve our archive and public facilities at Thomas Thomson House in the west of the city. Although there are no immediate plans for NRS to move out of General Register House or New Register House, these buildings do not feature in our core estate over the long-term. This intention remains subject to a number of challenges and constraints, not least funding, and at this stage this is our preferred direction of travel over the long-term, not a hard and fast commitment." 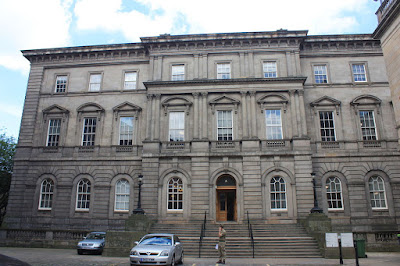 It is now imperative that this programme is accelerated.

One final point - the BBC story states the following:

"They (the NRS) said there was no loss of information as all records were digitised.

"The records office said a team of volunteers was on standby in case flooding occurred in future."

First, the records are all digitised - but it is also the case that records which have been poorly digitised can be rephotographed from the original registers. In other words, whilst they have all been previously digitised, some of that work was not up to par, and I have personally asked on trips to ScotlandsPeople centres to have records rescanned for consideration later in the day. I have absolutely no idea whether this service now remains an option, or how extensive the damage was.

As for the second point - I would sincerely hope that records are now not in a place where they might be potentially damaged again.

I look forward to the day when Scotland has a modern purpose built national archive repository on a par with Northern Ireland's PRONI and England's National Archives.

(Image courtesy of Wikipedia at https://en.wikipedia.org/wiki/Robert_Matheson_(architect))

Pre-order Tracing Your Irish Family History on the Internet (2nd ed) for just £11.99 at https://www.pen-and-sword.co.uk/Tracing-Your-Irish-Family-History-on-the-Internet-Paperback/p/16483. Details of my genealogical research service are available at www.ScotlandsGreatestStory.co.uk. Further news published daily on The GENES Blog Facebook page, and on Twitter @genesblog.
Posted by Chris Paton at 21:31