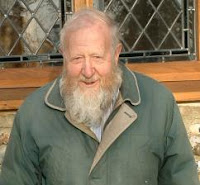 Discover my Past England finished as a magazine at the end of last year, but within its pages I had a monthly column called Gene Genies, where I would interview someone from the family history community to help gauge the pulse of the modern family history world in the UK. Perhaps the most fascinating interview I did of all was with Robert Davey MBE in mid-2010, an extraordinary man who did something for his hobby that went far above and beyond the call of duty. His achievement was quite simple: Bob took on the Devil - and won.

In the first of a semi-regular series, where I hope you as readers can help, I'd like to pay tribute to the genies who inspire us in our communities - either through their devotion to the hobby, the heights that their achievements have reached, or the inspiration that they give to others. So here's a summary of what Bob did that so impressed me....!

Whilst out for a walk in June 1992, Bob and his wife came across the ruins of the old 8th century built Anglo-Saxon Church of St Mary the Virgin at Houghton-on-the-Hill, Norfolk (www.saintmaryschurch.org.uk). To his horror he found that the building was being used by Satanists to perform black masses, with a pagan altar found inside, a goat headed deity on the wall, and the numbers 666 scratched into the wall. The building was still consecrated, and a horrified Bob decided to rescue it from its decline.

The Satanists soon got wind of his plans, sent him death threats and at one point tried to run him down with a car. After being terrorised for a considerable period of time, Bob went public in 1996, and the Territorial Army soon learned of his predicament. Together they planned a sting to tackle the devil worshippers, and on a specific date when they learned that they were planning to return to the church the TA surrounded them on their approach, forcing them to flee. They never returned. The full story is at www.saintmaryschurch.org.uk/bob_davey/ 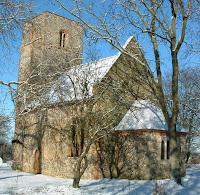 Since then the building has been lovingly restored to its former glory, with the roof, floor, windows, and missing stones on the walls all replaced. The church now has a Society of Friends, and as well as being used as a church once more it also houses a local museum. Accompanying the restoration is an excellent website, which contains transcriptions of many parish registers - christenings 1785-1935, weddings 1822-1942 and burials 1816-1892 - as well as other local records.

If you can think of someone in your community who you'd like to celebrate, please do drop me a note. Let's get our genie heroes recognised, whether in Britain or in Ireland, and give them credit where it is due!