Well I have just got in the door from London, after a long overnight bus trip to Glasgow, from another successful visit to Who Do You Think You Are Live (www.whodoyouthinkyouarelive.com). Although I worked on the Irish Family and Local History Handbook (www.genealogical.co.uk) stall with Bob and Liz Blatchford throughout the three day event, for the first time I also gave a couple of talks and helped out in the Society of Genealogy's experts advice area. In the latter I helped several people with queries, one of which was so extraordinary that I will blog about it later in a separate post! 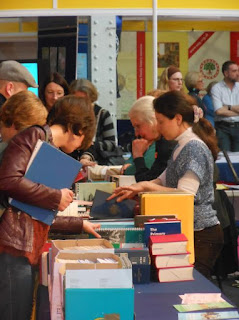 So first things first - how was the show? It was undoubtedly successful, but seemed to defy the run of expectations in terms of who would come and when from previous years, as far as I could see. Normally the Fridays and Saturdays are absolutely manic (particularly Saturdays), and then it gets a bit quieter on the Sunday. This year, however, was a very different kettle of fish - Friday actually felt as if it started off much quieter than previous years, though did get busier later on, whereas much of Sunday afternoon was as busy as the Saturday. This bizarrely was actually a tad disorientating in the sense that if you felt you knew when things would get a bit quieter, an attack wave of hungry genealogists would suddenly arrive to keep you on your toes! (Hell hath no fury like a genie looking for a bargain!) The interesting thing amongst the vendors camp was that there seemed to be quite a different perspective on how they were each doing from one to the other - some had one of the busiest shows ever, others discussed how they felt they might be down in takings on previous years. So on that basis it felt different, and yet from what I've heard so far the attendance was fairly on par with previous events, and there was no obvious reason that anyone could pin down as to why it did feel like that. Very odd!

The show programme itself was extremely busy, with more floor space opened up in the upstairs area for the advice area and talks theatres etc. As a speaker, both of my talks were well attended, with my Irish talk on the Saturday sold out well in advance and attended by some 250 people - it felt a bit like doing the genealogical equivalent of Wembley! I believe this talk was recorded by the event and will go online on their site, or possibly the WDYTYA magazine website, either wholly or in part at some point soon, so will let you know if, when and where it does. Handout notes for my talks will also be going online soon (next day or so) on the Society of Genealogists website at www.sog.org.uk/index.shtml. I have to say - I had a ball in these, and I've read some great comments and heard some great feedback at the show from those who attended. Thanks for these, and I hope they might have helped with your research!

Unfortunately, I had hoped to record video interviews with a few people at the show, but was run off my feet for a lot of it, so this year the cupboard will be bare from me on that front - though I did record some Irish dancers at one point (will put online later!). Nick Barratt and John Reid, however, were running around like blue bottomed bunnies with cameras and recording devices, so there was a lot recorded elsewhere - Nick's interviews will go on his Family History Show site in due course at www.familyhistoryshow.net whilst John already has his first audio based interview online at http://anglo-celtic-connections.blogspot.com/2012/02/interview-with-chris-watts.html, featuring Chris Watts, who previously worked at TNA.

The after show events were great on both Friday and Saturday, and I ended up late on Saturday night having drinkies with a large group of Scottish based genies. It was good to swap stories, have a laugh and discuss what's happening in the world from our end of the island, so much so that we have discussed the possibility of having regular informal meets here in Scotland on the back of it - so looking forward to seeing something hopefully come off the back of that.

On the genie front also, I just want to give a quick shout to something new on the SoG website. If you join the SoG you can gain access to its online digitised holdings, but I have never until now really known what they are (other than what the society shares with FindmyPast). However, they now have a great wee document on the website breaking down what is available, which will definitely be of interest if you are considering subscribing - it can be seen at www.sog.org.uk/online/datsets.pdf.

I had the pleasure to get the Tube back last night to Victoria in the company of both Else and John Hanson, and had some great chats with them both then and throughout the weekend. It takes a lot to get the thing up and running, but Else has already confirmed that the show will go on - forget any rumours you've heard to the contrary. There was obviously a lot of work put in by all of the society's reps at the event, including those who helped to man desks for the experts area and more, and they all need a serious round of applause.

Final thanks once more though to Bob and Liz Blatchford - thanks for the craic throughout the event yet again! 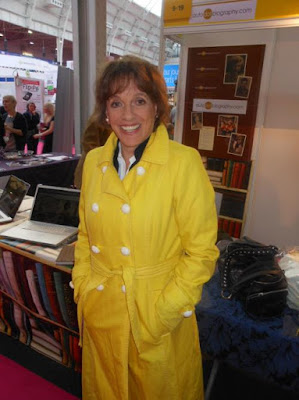