The biggest event of all for me at this year's Who Do You Think You Are Live occurred during the final advice session that I helped with in the Society of Genealogists experts area on Sunday. I had already successfully helped two members of the public when along came a lady called Jacquie Watson, with whom it soon transpired I shared the most remarkable link!

Readers of this blog will know that my next book due for publication is The Mount Stewart Murder: A Re-examination of the UK's Oldest Unsolved Murder Case, which will be released in June of this year. Now this deals with the unsolved murder of my three times great grandmother Janet Henderson (Rogers) on March 30th 1866 in Perthshire. The police force which investigated the mysterious case was Perthshire County Constabulary, with George Gordon its chief constable. Gordon was also the chief constable of the constabularies in Kinross and Clackmannanshire, and just as the Mount Stewart Murder investigation was getting underway he was also having to clear up another investigation - that of the Blairingone Murder, and the trial of a certain Joseph Bell, who had killed a baker's delivery man by the name of Alexander McEwan in Clackmannanshire, just a few months before the events at Mount Stewart Farm. Three weeks after my own ancestor was murdered, Bell was hanged for his crime, a story which forms part of the book that I have just written.

So along comes Jacquie.... She sits down and asks if I can help with a murder she wants to investigate - no problem, says I, sure there's all sorts in local archives and at the NRS in Edinburgh. When did it take place? 1865 is the answer - what a coincidence says I, as I also had an ancestor murdered the following year! And where did it take place? Blairingone, comes the reply. At this point I just looked at her in disbelief - what was your ancestor's name, says I? Alexander McEwan was my three times great grandfather comes the answer!

Of all the people she could have picked to speak to, I happened to probably be the one person in Britain who knew her ancestor's murder story almost as much as I know my own ancestor's murder story, because it forms two chapters of my book!!! Needless to say, there was much excitement, and as I had the book on my iPad, I showed her some of the chapter as written and discussed some of the materials I had found to help explore the story - she will shortly be off to a few places in Scotland to help pursue the story for herself now!

So if anybody ever asks you why you should go to a genealogy event - it is because miracles do actually happen! :) 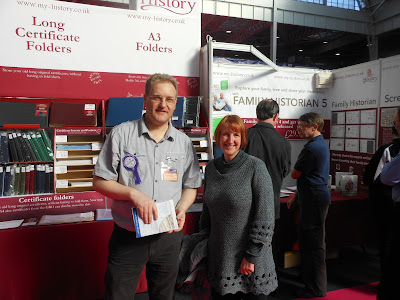 Myself and Jacquie Watson, the three times great grandchildren of murder victims investigated by the same Chief Constable in the same year - and soon to be told in the same book!