My latest book, The Mount Stewart Murder, is now available from the History Press at http://www.thehistorypress.co.uk/products/The-Mount-Stewart-Murder.aspx. This one is not a family history handbook, instead it is a story I have been able to pull from my own ancestry over many years of research. Here's a wee bit of blurb to set the scene:

Friday, March 30th 1866. In Scotland’s fair city of Perth the authorities prepare to try poacher Joseph Bell at the twice yearly Circuit Court of Justiciary for a murder carried out just a few months before in the neighbouring county of Clackmannanshire. If convicted, Bell will become the first man to be hanged within Perthshire for some seventeen and half years. As the prosecution readies its case, a nervous agricultural community within the surrounding countryside remains virtually locked down over the deadly cattle plague epidemic currently raging across the whole of Britain. Amidst a climate of fear, by the small village of Forgandenny in the south of the county the situation is suddenly about to take a dramatic turn for the worse. 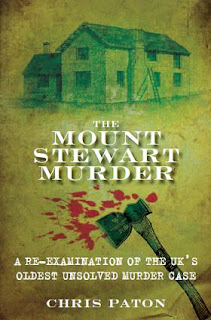 In this account of one of Britain’s most horrific murders, one of the victim’s descendants, Largs based family historian Chris Paton, pulls together surviving contemporary evidence to detail what has since been identified as the longest open murder investigation by a modern British police force. In the course of a year long investigation, and a national manhunt for the killer, the farm’s ploughman was formally indicted for the killing on the sudden shock testimony of the sacked servant, Christina Miller, many months after the murder had occurred. Tried in Perth in April 1867, the case against him was subsequently and controversially found to be ‘non-proven’, a unique verdict allowed within Scots Law which implied a possible involvement, but without enough evidence to formally pass a sentence confirming the ploughman’s guilt.

There are a lot of people who have helped over time with both the research into the story and the book itself, all of whom are given due credit in the introduction, but a few in particular have been particularly magnificent - Greg Ross, Willie MacFarlane, Matilda Richards, the archive staff at both the University of Dundee and Perth and Kinross, the A. K. Bell Library, the National Records of Scotland, the BBC's Julia Ross, Rhona Brudenell and Claire White, former Your Family Tree editors Garrick Webster and Tom Dennis, genealogist Celia Heritage, dress historian Jayne Shrimpton, and most importantly as always, Claire, Calum and Jamie. A big thanks to all!

There is a Facebook page at http://www.facebook.com/pages/The-Mount-Stewart-Murder/241521572627316?sk=info where I will be posting additional details about the research, some contemporary snippets of information from the period and more.

UPDATE: an ebook edition is now available at £4.99 for iPad, iPod and iPhone - visit The History Press page (see above) for the link, or the iTunes iBooks site.

Check out my Scotland's Greatest Story research service www.ScotlandsGreatestStory.co.uk
New book: It's Perthshire 1866 - there's been a murder... www.thehistorypress.co.uk/products/The-Mount-Stewart-Murder.aspx (from June 12th 2012)
Posted by Chris Paton at 11:14