National Records of Scotland website now up and running

Remember the rumour that the National Archives of Scotland and the General Register Office for Scotland merged a couple of years ago to form a body called the National Records of Scotland?! Well, believe it or not, it wasn't a rumour, and it did actually happen, but you wouldn't have thought so from the two former institutions' continued online presence which two years on were still doing their own thing!

That's now beginning to change. Tim Ellis, the new Registrar General and Keeper of the Archives, has just announced on Twitter (@timgov) that the NRS now has a more dedicated main portal site up and running at http://nrscotland.gov.uk. Previously the URL led to a site that told you there had basically been a merger, with little more to offer other than links to the previous websites of the two bodies, but the new platform now has considerably more bells and whistles. Some links still redirect to the old GROS and NAS platforms - mainly for catalogues and other tools - but with items for news and other areas you can now see stories appearing on dedicated NRS based pages. 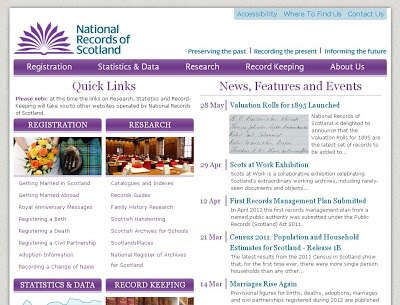 My new book, Tracing Your Irish Family History on the Internet, is now available from Pen and Sword. My next Pharos Scottish course, Scotland 1750-1850: Beyond the Old Parish Registers, starts May 15th - see http://britishgenes.blogspot.co.uk/2013/04/scotland-1750-1850-beyond-oprs-starts.html. Time to smash a few brick walls...!
Posted by Chris Paton at 12:32