Apologies for the lateness of this post, and indeed the lack of posts over the last few days, caused by a combination of full on election campaigning and preparation for a 2 week lecture tour to Vancouver starting this coming Saturday!

Because things are so busy I hadn't originally intended to visit Birmingham this year at all, but I decided at the last moment that that just wasn't good enough! The compromise was a hit and run raid on WDYTYA? Live (www.whodoyouthinkyouarelive.com) for one day only, travelling down on the Thursday afternoon and returning to Scotland late Friday evening. Once again, the new venue was a hit with regards to my travel plans, as my train arrived quite literally beside the venue, with my hotel just a 5 minute walk away. 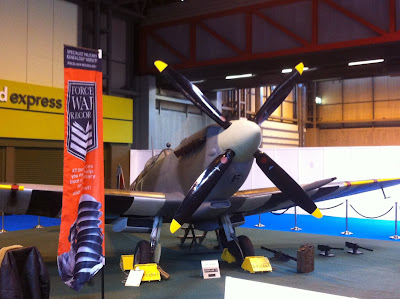 I spent most of Friday walking around and speaking to vendors to try to determine what was new and of potential interest (the only real exception being with the DNA side of things), and also did an impromptu hour on the Pharos Tutors stand (www.pharostutors.com), to help promote our courses. This was the first year in a while where I have not helped out on the Ask the Experts stall or given any lectures, and the first where I did not officially work on a stall, so it was a novel experience to have gone in as a member of the public. I have to say though - and I'm not sure if my different viewpoint was the reason - but I actually felt that this year's show was a bit 'flat'. By this I mean that there seemed to be little by way of any 'oomph' or 'razzle-dazzle' to the proceedings - no major themes (e.g. no 1939 tea-room) from any of the main vendors, no major names in lights for the celebrity talks, and to be honest, not even much by way of ground-breaking major releases. I left on the Friday night thinking that a day there was certainly more than enough. Unofficially I was told that there is now a new management team in place, and if so, I think someone perhaps needs to inform them of the Who Do You Think You Are? part of Who Do You Think You Are? Live - it did used to run off the back of a quite well known family history TV show of the same name. For the first time out of nine times of having attended the event, I just didn't feel that love... 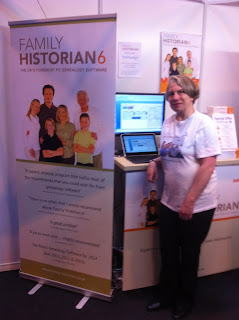 Nevertheless, I did glean some news from the vendors in attendance. Jane Taubman was at work on the Family Historian stand, and told me that version 6.2 is now available, with one major new addition, the ability to search for matches within FindmyPast's website (similar to the shaky leaf matches between Ancestry and Family Tree Maker). I think that might be the first software programme to do this with FMP, so could be useful.

On the Irish front I bumped into Brian Donovan from Eneclann, who told me to keep an eye out for three major releases this year concerning Decade of Centenaries records, one of them coming fairly imminently. He also told me about Eneclann's new Irish Family History Centre venture being established in Dublin as a one-stop spot for tourists to have a go at looking for their roots - there is more on this at www.irishfamilyhistorycentre.com. I also caught up with the North of Ireland Family History Society (www.nifhs.org), who were releasing their latest guide book on research in Derry, so a must purchase item for me, as that's where my great grandfather's family were from! 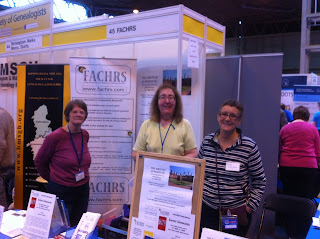 Ireland was well represented at the event, but disappointingly the only Scottish vendors I saw in attendance were the two universities, although I did bump into some fellow genies. One major revelation on the further education front was an organisation I'd never heard of, something that really surprised me because it has been up and running since 1998. The Family and Community Historical Research Society, or FACHRS for short (www.fachrs.com), was previously affiliated to the Open University, but now operates as a society in its own right, producing an academic journal and running various crowd-sourced research projects through its membership. They seemed very clued up and certainly more at the academic end of the scale, which I was fascinated to hear about - do have a look at their website! They also have a new project book coming out shortly, The British Almshouse: New Perspectives on Philanthropy, edited by Nigel Goose, Helen Caffrey and Anne Langley, which will be £12 and some 400 pages - keep an eye on their website for details.

I also met the Famicity team (www.famicity.com), a French company that has been running for a few years now, and which promises to 'preserve your legacy for the future generation' through a collaborative family tree and timeline hosting site, as a new 'memory keeper'. Having seen a few companies like this come and go I have become somewhat sceptical of digital estate sites (I'm thinking of sites such as Arcalife that came and went in the blink of an eye), and so I did ask the lads on the stall why their offering was any different? The answer, it transpires, is in the people backing the site, they have some serious investment from key players in some fairly major corporations, so this one is certainly a site that is worth keeping an eye on. These guys gave me the impression that it might just happen with them, so I wished them the best of luck with it in the UK. 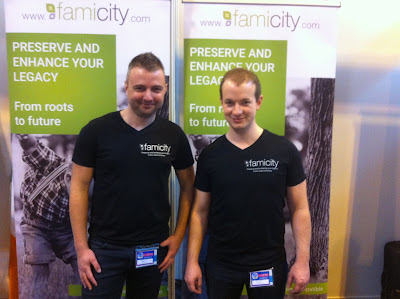 Possibly the biggest records release announcement was that of the Greenwich naval pension records from FindmyPast (www.findmypast.com), and the renewal of a partnership agreement with the English based Federation of Family History Societies (www.ffhs.org.uk). I did ask a few folk who attended the FMP dinner on Thursday night what was potentially on offer from the company in the near future, and the consensus was 'small beer' by the sounds of it - a few archive collections here and there, but no big mega release seemingly on the cards. Is the 1921 census going to be the next big offering?

On the magazines front I met the new owner of Family Tree magazine, which has now been acquired by Warner Publications. By coincidence, on the magazine's bookstore I met Rachel Bellerby, who I have been sending articles to for over 4 years for a column I write for History Scotland magazine, which is also owned by Warner - when worlds collide! Andrew Chapman was also doing sterling stuff on the Discover Your Ancestors (www.discoveryourancestors.co.uk) bookazine stand, the 5th annual edition now being available for sale at all good retailers. 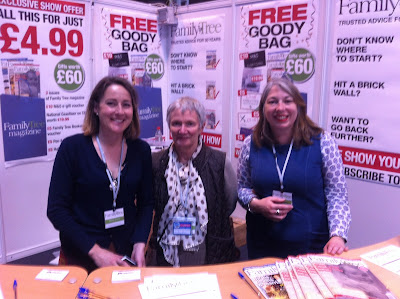 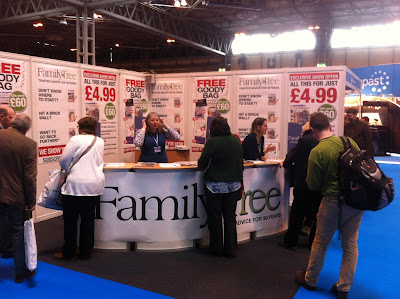 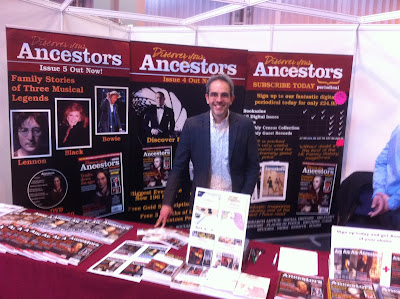 Finally, I also caught up with Laurence Harris from My Heritage (www.myheritage.com), who gave me an update on the site. One of the newest developments is that they will be using their SmartSearch technology to now do searches within Google Books, as well as through various newspaper collections. Laurence gave me a quick demo, with which I was highly impressed. MyHeritage has been one of those sites for a long time that seemed to offer everything other than what I was needing, but some recent developments have caught my eye (e.g. the Irish censuses can be searched through the site now). I had a bit of a play with the site at the weekend after I returned, and also quite like the look of their charting options and products, so will be keeping a closer eye on its future development than perhaps I have in the past. 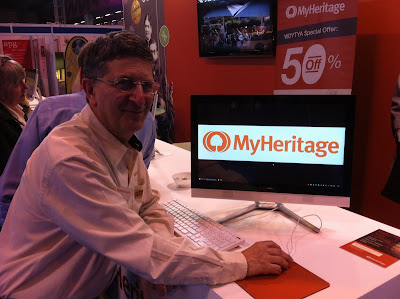 So that was it for another year - just a quick glimpse this time! - but here are a few more snaps... 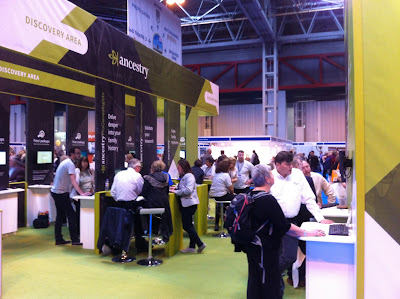 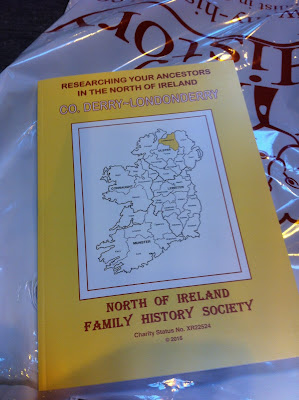 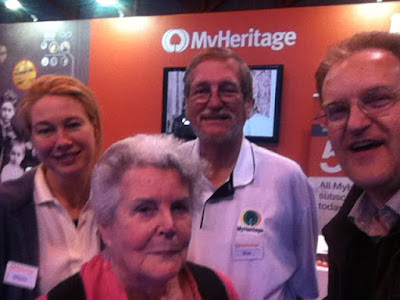 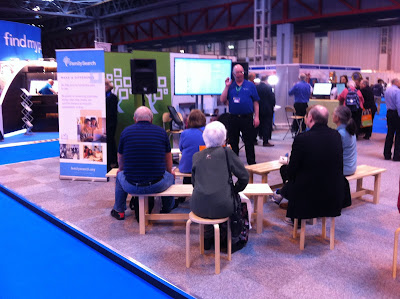 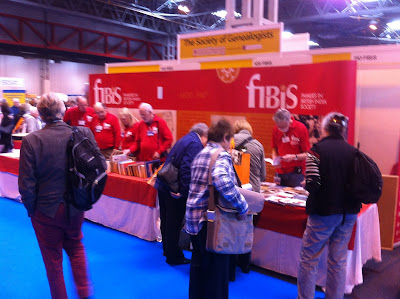 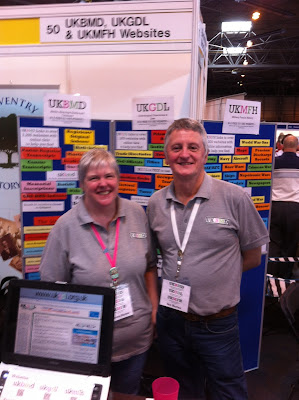 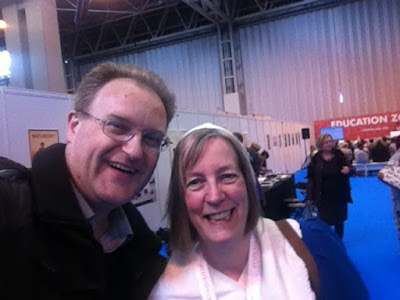 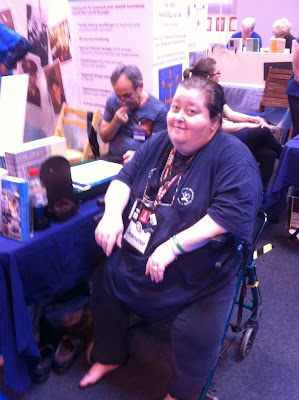 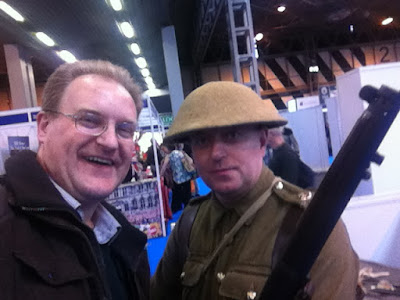 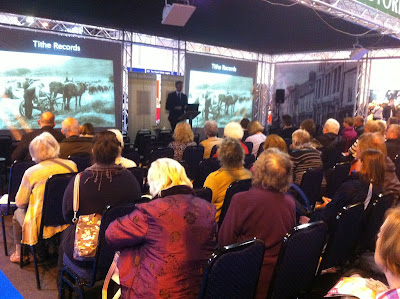 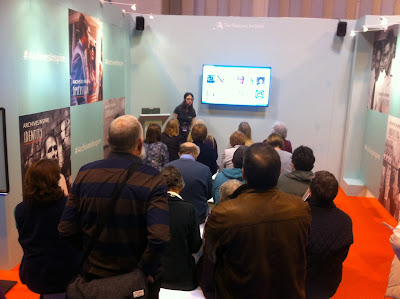 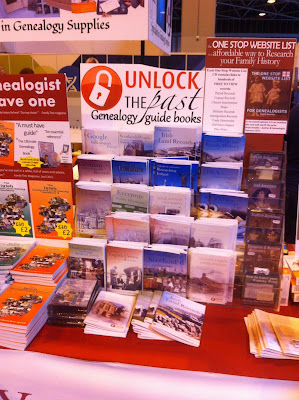 For details on my genealogy guide books, including A Decade of Irish Centenaries: Researching Ireland 1912-1923, Discover Scottish Church Records (2nd edition), Discover Irish Land Records and Down and Out in Scotland: Researching Ancestral Crisis, please visit http://britishgenes.blogspot.co.uk/p/my-books.html. My Pinterest account is at https://www.pinterest.com/chrismpaton/.
Posted by Chris Paton at 21:01