New book on how the Circus empowered women

I've been asked to give a plug for the following: 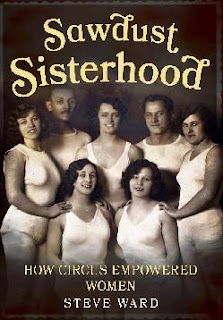 Now available for pre-ordering at www.waterstones.com and www.amazon.co.uk

‘Sawdust Sisterhood is a seminal text in recognising the role that our circus sisters played in the fight for gender equality’ (Kirstin Sillitoe; GM Vulcana Women’s Circus)

Since the late 1700s the circus has allowed women to compete and succeed in a male dominated world. Steve Ward explores the rise to fame of some of these women, their colourful lives and the crucial roles that they played in the rise of feminism.

• In her bicentenary year learn how Madame Saqui achieved celebrity status and influenced fashion
• Discover how a young woman named Zazel became the first ever human cannonball
• Uncover the secrets of strongwomen Sandwina and Vulcana and their fight for female emancipation
• Explore the lives of the female Blondins and their death defying high-wire deeds
• Learn about Nellie Chapman, the Lion Queen and her performance before Queen Victoria

Steve Ward is a published author (see www.steve-ward.net) with a particular interest in circus. He has an M.A. from the University of Loughborough, researching the role of circus in education. He also devises and directs circus shows with young people.

For details on my genealogy guide books, including A Decade of Irish Centenaries: Researching Ireland 1912-1923, Discover Scottish Church Records (2nd edition), Discover Irish Land Records and Down and Out in Scotland: Researching Ancestral Crisis, please visit http://britishgenes.blogspot.co.uk/p/my-books.html. My Pinterest account is at https://www.pinterest.com/chrismpaton/.
Posted by Chris Paton at 14:12