Belfast City Council is a luv - it's official...!

Many of us with Northern Irish connections know just how frustrating research can be, with the General Register Office for Northern Ireland charging an absolute rip off rate of £14 per birth, marriage or death record (plus postage!), the highest rate charged by any GRO within the United Kingdom - quite where the word "united" fits in in this regard is difficult to make out.

However - if you have ancestors who were were buried in Belfast's City Cemetery, Dundonald Cemetery or Roselawn Cemetery, you are in for a bit of a treat. Belfast City Council has for some time had an online database available at www.belfastcity.gov.uk/burialrecords, allowing you to search within the three cemeteries for burials, free of charge. In February of this year they improved the set up, in that once having identified where an ancestor was buried, they duly allowed you to take the research a stage further by seeing who else was buried within the same lair. Well God bless 'em all, they haven't stopped, for now they have a new addition to the site - a chance to purchase a copy of the actual burial record for just £1.50, so long as the burial was at least 75 years ago.

Here's an example of how it works, using the burial of my two times great grandmother Florence Graham (nee Halliday). A search on the database provides the following information: 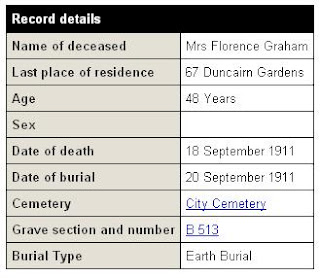 Clicking on B513 allows me to see who else was buried in the lair, but if I wish for more on Florence, I can now purchase the original burial record, which reveals a great deal more information, including Florence's cause of death: 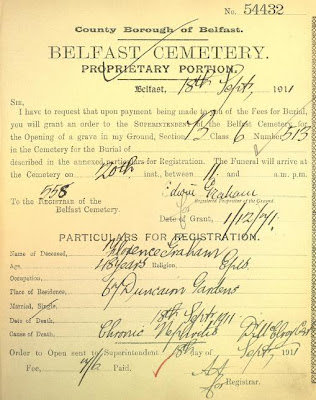 The burial record provides most of the information available on the equivalent death record, including cause of death (in this case chronic nephritis), but excluding the informant's name to the civil registrar. However, it also includes details of the funeral itself, and ownership details of the lair. The big deal with this is the fact that this is just £1.50 and not £14 + p&p, i.e. just one tenth of the cost.

NB: To be able to download a record you need to temporarily switch off your pop-up blocker on your browser.

(A huge thanks to Eddie Connolly @teddiec for this news!)

Check out my Scotland's Greatest Story research service www.ScotlandsGreatestStory.co.uk
New book: It's Perthshire 1866 - there's been a murder... www.thehistorypress.co.uk/products/The-Mount-Stewart-Murder.aspx (from June 12th 2012)
Posted by Chris Paton at 01:08