Brilliant! I've just been alerted to the fact that a TV series I once worked on in 1997 is now online via YouTube (it may have been there for a while!). So without further ado, here's one of my fave episodes - partly because it was with the best presenter I ever worked with, one of the best crews, and one of the most fun shoots in a great part of England.


A few behind the scenes facts:

1) Richard's horse was called Thatch! (Bought I think when Richard wrote a book called Riding the Retreat)
2) In the office at Bristol, the gap between my desk and that of the director Steven Clarke became known as "Malfosse" in honour of this programme :)
3) Richard told me the funniest story ever on the recce for this at Battle, which I shared on my blog when he sadly passed away - see http://scottishancestry.blogspot.co.uk/2011/05/death-of-professor-richard-holmes.html
4) BBC Visual FX did the flaming torch and the fires sequence. The technician told me he was the Vis FX guy who had a few years before been responsible for setting off a series of explosions in London, to which the emergency services immediately responded. When the police and fire brigade arrived, it was to find a small army of Daleks emerging from the smoke! (Vis FX forgot to alert them that they were filming Doctor Who!) 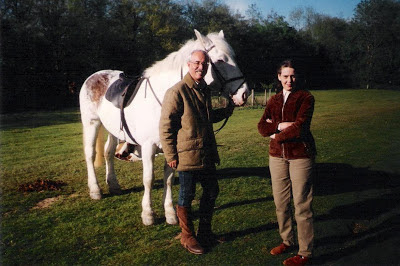 I'll put a few more episodes up in due course over the next few days!