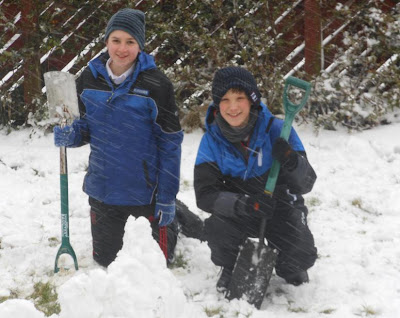 OK, I am going to have to admit that this is not quite the image I was hoping to show from the fantastic new records set of Griffith's Valuation Revision Books for Northern Ireland, which are being released by the Public Record Office of Northern Ireland next week!

I should explain... I was booked to go on a ferry this morning over to Belfast for a PRONI User Group meeting, when lo and behold, overnight Snowmageddon decided to hit the west of Scotland (and by all accounts, Belfast). I woke up at 4am to get up to drive down to Cairnryan, and at that stage there was no snow in Largs, but a howling gale was raging outside - and I've done the Belfast ferry enough times to know that the correct strategy to adopt in such circumstances was just to retreat back to bed! Upon waking up again at 7am it was then to discover that the whole of Largs had received a major dump of snow, with much of the west of Scotland similarly afflicted. As school has been cancelled my son Calum (right) has spent much of this morning attempting to reform the snow into a handy igloo, as shown. So, sadly, I can't bring an update from the meeting, where we were to get a sneak preview of the new records.

Sir Richard Griffith's Primary Valuation of Ireland was published for the various counties in Ireland between 1847 and 1864, basically providing the rateable value of property on the island for taxation purposes. But that wasn't the end of it - after the initial publication, annual revision books were compiled which showed changes in ownership or rateable value. The books for Northern Ireland's six counties, up to 1930 and held at PRONI under VAL12B, have been digitised in partnership with FamilySearch, and will be going online next Wednesday 27th March. But you don't need me to go to Ulster to get the craic for you - instead, visit Bill Macafee's excellent description of the records at www.billmacafee.com/valuationrecords/griffrevisions.pdf, for a comprehensive example of their worth - and exactly how they should be interpreted, using Londonderry as an example.

If I get more on the set up, which I believe will be in a browsable format per townland, as opposed to name searchable, I will bring it to you in due course. I have used some of the revision books from the south before now, but none of the northern records as yet, so VERY much looking forward to what will be PRONI's biggest project this year in terms of online records provision.

You will find more information on the use of Griffith's Valuation, the best resources for it available online, and how to follow up research with it using revision books (aka cancelled land books), in my new book Tracing Your Irish Family History on the Internet (see below!).

My new book, Tracing Your Irish Family History on the Internet, is now available from Pen and Sword. For my other genealogy books, please visit  http://britishgenes.blogspot.co.uk/p/my-books.html; whilst for my online Scottish based genealogy courses please visit the Pharos Teaching and Tutoring Ltd site.