Ancestry has released a new collection on the lead up to Saint Paddy's Day next week - Ireland, Lord Viscount Morpeth's Testimonial Roll, 1841. It is searchable at http://search.ancestry.co.uk/search/db.aspx?dbid=2514. The document was signed when George Howard (Lord Viscount Morpeth) stood down as the Permanent Secretary for Ireland.

I was very kindly given access to his a week ago, in order to help beta test it, and there are quite a few things that users should be aware of when using the roll. The first thing is that although it was initially envisaged to contain some 250,000 names, this has been substantially revised downward now to 150,000. 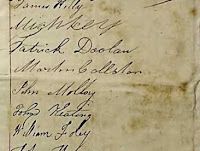 The second thing to be aware of, and perhaps much more frustrating, is the nature of the information contained itself. When first discovered, it was believed that dating from 1841, it would act as an effective census substitute for the missing Irish 1841 census. A major feature of a census, however, is the ability to both discern a name and a location where that person was enumerated. An unfortunate problem with Lord Morpeth's roll is that only 1% of the names listed have any form of place or address listed alongside them. The rest are simply names gathered in Dublin and across the country, and so for most names there is no indication where the roll was signed. I have found one page where there is a Michael, Martin and Patrick Colleton, for example, who have all signed the document, but I have no idea if they are the three brothers I believe may have existed in Carrick-on-Suir in County Tipperary - so it merely remains a possibility.

There may be some clues that can help to narrow down the listing however. On many pages, the name of a Catholic priest or a Justice of the Peace is included, and after their names are the initials 'PP' or 'JP'. There are ways to try to locate where these lived - for example, Jane Lyons' excellent From Ireland site has a parish priest index from 1836 online at www.from-ireland.net (check the search box categories at the top of the home page). Trade directories, available on a few sites, may also help with the JPs. The context of other names on the page may also help - if there is an unusual name or names, target those, and try to locate where in Ireland that person was. In the Colleton example above, there is only one Martin listed - so I only have one possibility to play with. The use of the marriage and death indexes can also help to narrow down the likelihood of it being him, by identifying possible candidates from 1845 and 1864 in areas of the country  (if there were other Martins, where were they; were they old enough, etc?), but it will be a hard slog to confirm it. (Check out my new book below for lists of other sources that might help and where to access them)

The challenge with Morpeth's Roll is going to be a fun one, and perhaps at times frustrating - but this is one dataset where you may really need to put some work in. The document is what it is - and it has been beautifully restored and placed online by Ancestry. Getting the best out of it may be hard work, but personally speaking, I love a challenge! 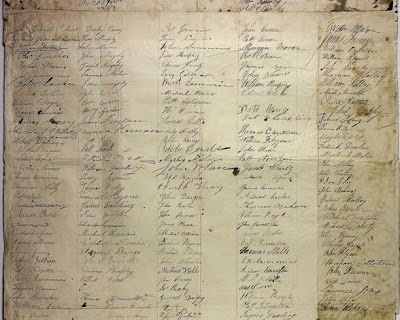 (With thanks to Miriam Silverman at Ancestry)

My new book, Tracing Your Irish Family History on the Internet, is now available from Pen and Sword. For my other genealogy books, please visit  http://britishgenes.blogspot.co.uk/p/my-books.html; whilst for my online Scottish based genealogy courses please visit the Pharos Teaching and Tutoring Ltd site.
Posted by Chris Paton at 09:42