The National Archives of Ireland has just uploaded its Census Search Forms database utilising census data from the 1841 and 1851 censuses for Old Age Pension applications from 1908 onwards.

The Census Search Database database is directly accessible at http://censussearchforms.nationalarchives.ie/search/cs/home.jsp 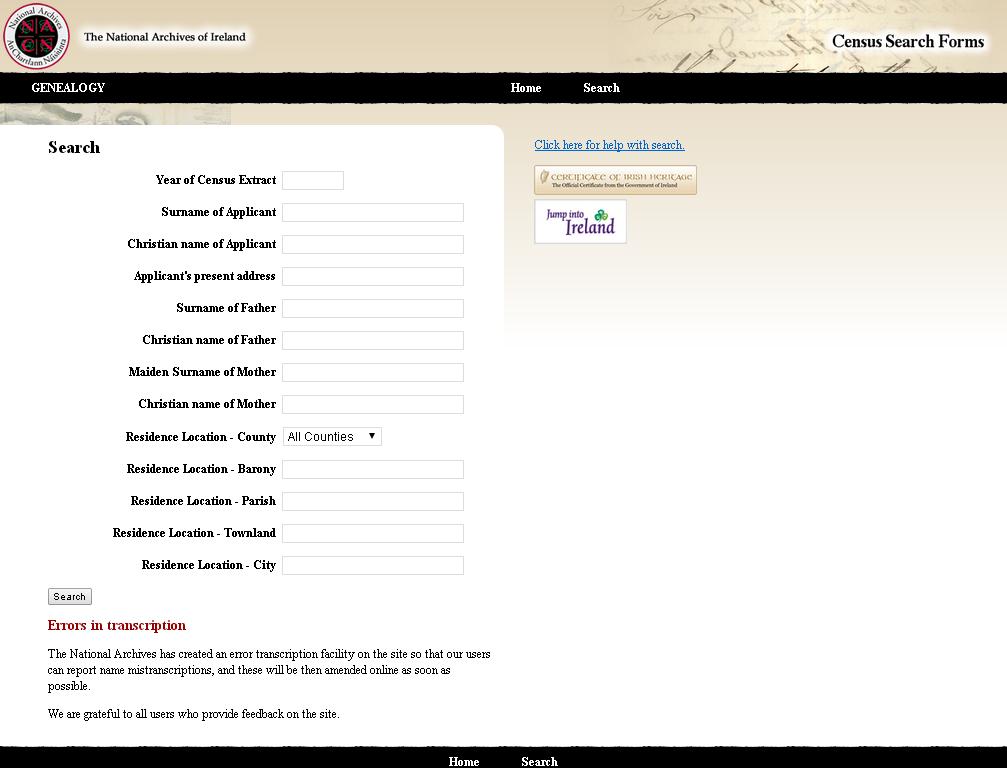 The Old Age Pensions Act 1908 introduced a non-contributory pension for eligible people aged 70 and over. It was implemented from January 1909 in England, Wales, Scotland and Ireland. To be eligible, applicants had to be 70 years old, to have an income of less than £31.10.00 per annum and to 'be of good character'. During the first three months of 1909, 261,668 applications were made in Ireland. By 31 March 1910, 180,974 Irish pensions had been granted. The level of take-up from those eligible in Ireland was 98%, as opposed to 45% in England and Wales, demonstrating the need for such a measure due to widespread poverty. The full pension of 5 shillings per week for a single person, or 7 shillings per week for a married couple, was available to those with an income of less than £21.00.00 per annum.

Proof of age was an essential part of the process of application for a pension. Because civil registration of births did not begin in Ireland until 1864, applicants had no official documentation to prove their age. It was decided that searches of the 1841 and 1851 census returns, still in the Public Record Office at this time, could produce acceptable documentary evidence of a claimant's age. The claimant had to provide parents' names and their residence in March 1841/1851. They also had to state the age they believed themselves to have been in the appropriate year. These forms were sent to the Public Record Office where searches were carried out to prove eligibility. When a search could not find the claimant, the form was returned with 'not found' or 'no trace' written on it. Even then, you will get the claimant's version of his family members' names and location in 1841 or 1851. But many searches were successful, and these can often provide the names and ages of every person living in the claimant's household at the time of the relevant census.

The Public Record Office of Northern Ireland (PRONI) holds Census Search Forms for people living in Antrim, Armagh, Cavan, Derry, Donegal, Down, Fermanagh, Monaghan and Tyrone at the time of their pension applications and include those who had been born or spent their childhood in other counties. They are available on microfilm in PRONI's self-service microfilm room, and their contents were published in two books by Josephine Masterson: Ireland 1841/1851 Census Abstracts (Republic of Ireland) and Ireland 1841/1851 Census Abstracts (Northern Ireland).

Also available are surviving Pre-1901 Census Fragments from across the island at www.census.nationalarchives.ie - the same database previously offering only the 1901 and 1911 censuses.

Now available for UK research is the new second edition of the best selling Tracing Your Family History on the Internet: A Guide for Family Historians. And for those wishing to take Scottish ancestral research a bit further, my next Pharos course, Scotland 1750-1850: Beyond the Old Parish Records, commences May 14th 2014.
Posted by Chris Paton at 17:05