Thanks to reader Keith Jones for informing me that the FamilyRelatives website at www.familyrelatives.com has been down for several months.

FamilyRelatives had several collections on its site beyond the English and Welsh GRO images and censuses. Whilst I personally rarely used it, it was still a favourite repository to visit for the GRO overseas indexes, which were freely available on the site. These record many events such as army chaplains and other military records and registers, various consular returns, Ionian Island registers, and more. Although administered by the English based GRO, they feature people from across the UK, including citizens from what is now the Republic of Ireland (which was previously in the UK). For example, the marriage of my 3 times great grandmother from Dublin, to a soldier who was born in India to an Irish father, took place in Corfu, and they went on to have kids in Gibraltar and Bermuda, before returning to Ireland - all events are recorded in the overseas indexes and certs.

The site was last cached on the Internet Archive on June 19th 2015 at https://web.archive.org/web/20150619095612/http://www.familyrelatives.com, and its dedicated blog at www.familyrelatives.blogspot.co.uk has not been updated since November of last year. I don't know if it has ceased to trade, or whether it has a technical fault, but if anybody has information on its current status, it would be gratefully received.

NB: I've not used other sites for access to the GRO overseas consular and military birth, marriage and death indexes for quite some time, but I've had a quick look and as far as I can see, they are on TheGenealogist (www.thegenealogist.co.uk) via its Overseas BMDs collection, and FindmyPast (www.findmypast.co.uk), which seems to have the indexes gathered into datasets beginning with British Nationals in the UK part of the site - e.g. British Nationals Armed Forces Births 1761-2005.

Unfortunately, from what I can see, neither site allows searches in individual collections in the way that FamilyRelatives used to (indeed, as FindmyPast used to), so you cannot search for the GRO Ionian Islands Chaplains Returns, for example, as an individual dataset on its own. For an idea of what is included, cached description lists from Family Relatives are accessible at https://web.archive.org/web/20150510092737/http://www.familyrelatives.com/post_search.php?area_id=11.

* UPDATE: Thanks to Nick Thorne from TheGenealogist for flagging up that you can in fact select the individual collections there, via the Section drop down menu once you have accessed the Overseas BMDs item in the BMDs menu (see pic) - this would effectively seem to make TheGenealogist by far the best place online now to be able to control a search within these various GRO collections * 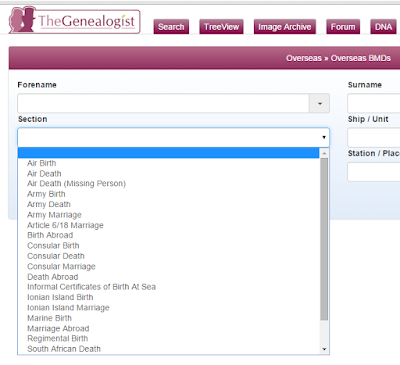 To order original entries from the GRO, obtain the index entry then visit the English based GRO at www.gro.gov.uk/gro/content/certificates/default.asp. Note that for overseas certificates, you have to use a different search form on the site than those used to obtain English and Welsh BMD certs.

Note that some of the overseas entries for Scots are included on ScotlandsPeople (www.scotlandspeople.gov.uk), within the miscellaneous returns sections.

Ancestry (www.ancestry.co.uk) does not host the same indexes, but does carry various other miscellaneous overseas records, as sourced from the National Archives collections RG32 to RG36. These are available in a collection it calls UK, Foreign and Overseas Registers of British Subjects, 1628-1969, available at http://search.ancestry.co.uk/search/db.aspx?dbid=1993. The same records are also available via BMDRegisters at www.bmdregisters.co.uk and on TheGenealogist.

For details on my genealogy guide books, including my recently released Discover Irish Land Records and Down and Out in Scotland: Researching Ancestral Crisis, please visit http://britishgenes.blogspot.co.uk/p/my-books.html. My Pinterest account is at https://www.pinterest.com/chrismpaton/.
Posted by Chris Paton at 16:52