No more backbiting! Slander in Scotland

A post first published on my other wee blog in 2012!

After some time away from them, I've gone back to transcribing the weavers records of Perth, which are in held private hands but which I was able to photograph a few years ago for a university project. I'm currently working on the minutes from 1671, and found this wee gem which made me laugh! It's from December 21st 1671, at a meeting held within the merchant seat of St. John's Kirk in Perth: 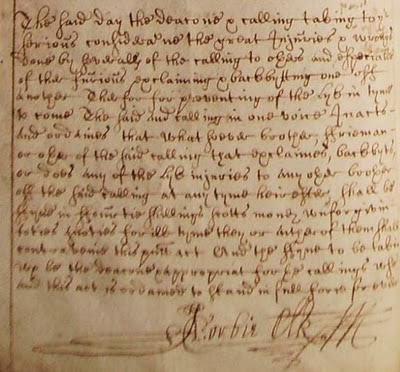 If it all looks a bit weird, it's because it is written in both Scots and in Secretary Hand, so here it is in English:

Some unusual Scots terms in the extract (see www.dsl.ac.uk)

For a handy tutorial on how to read old forms of Scottish handwriting visit www.scottishhandwriting.com.

But the BIG question is - what was all the backbiting about? Sadly, the minutes just happen to leave out the juicy bits...!

For details on my genealogy guide books, including my recently released Discover Irish Land Records and Down and Out in Scotland: Researching Ancestral Crisis, please visit http://britishgenes.blogspot.co.uk/p/my-books.html. My Pinterest account is at https://www.pinterest.com/chrismpaton/.
Posted by Chris Paton at 01:16