I have the best of both worlds. On my father's side, Scottish blood, on my mother's side, Irish blood, with a mix of Irish and Scottish in the mix from Northern Ireland. I therefore get a one in three chance of supporting the winning side in the Six Nations rugby, and two patron saints to play with!

For some time I have been diverting my attentions to the Irish side of my research, mainly because so much has become available online in recent times, but in the last couple of months I have returned to some of my earlier Scottish lines, most notably in the Perthshire parishes of Kinclaven and Little Dunkeld. And the discoveries keep coming!

Just a few days ago I found in the Associate Session kirk session records for Kinclaven that my six times great grandfather Andrew Henderson had been guilty of 'promiscuous dancing' in the parish at a wedding:

The Officer having reported that according to appointment he had cited to this meeting the following persons viz: Andrew Henderson, in ye Miln of Airntully, Lillias Grigor, John Nathan & George Ramsays, James Stewart, Joseph Morice, John, Agnes & Elizabeth Mallochs, Mary Crookshank, John Grigor, John Gellatly & Emilia Bennet all in Arntully. They being called, they all compeared... and they being Interrigate by ye Modr One by One if they had been guilty of the indecent behaviour of promiscuous dancing, They all answered in the affirmation. Then After the Indelacicy & Sinfullness of such a Practise was laid before them ye Modr together wt ye Aggravation of their Sin having got publick Warnings agt the same They were severally Interrogate […] they acknowledged their said conduct to be sinful & thro’ Grace resolved agt the same for the future, & also against the Countenancing in so far as Witness it in others...

They were all Removed. Then ye session proceeded to consider what Censure to Inflict upon them, and after Deliberation upon ye Matter They agreed in regard of some circumstances in ye case of ye Persons who had fallen into ye forsaid Indecent behaviour, to List in an admonition of them wt certifica[tio]n That if they shall afterwards be guilty of such a practise, the Session will inflict a higher Censure upon them. And wt respect to John Ramsay the Session delayed ye Considerat[ion]n of his case till next Meeting & that both he & James Stewart be cited to attend.

They being called in, and after ye Mod[erato]r had intimated to John Ramsay what ye session had agreed upon wt respect to him all ye rest were admonished by ye Mod[erato]r in ye Name of ye Lord Jesus Christ the only King & head of his church, wt certifican That is all or any of them should be found guilty of such a sinfull practise again, ye session would inflict a higher censure upon them. And they were exhorted by ye Modr to watchfulness & Rependance upon the Lord. 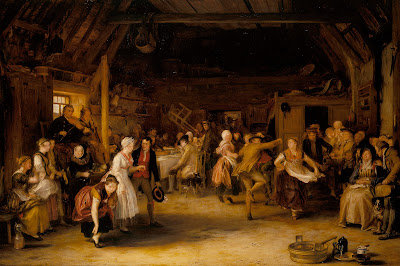 Proud of my ancestor's promiscuous dancing as I am, he pales in comparison with my other ancestors, James Brough and Anne Lamb, who I have also just found were guilty of antenuptial fornication in the same parish!

May 3d (1778) It being reported that James Burgh & Anne Lamb his spouse had been guilty of antenuptial fornication & James having been desired to attend this Meeting was called & compeard; and being interrogate he acknowledged his having been guilty of antenuptial fornication wt Anne Lamb his spouse. The Modr endeavoured to lay the evil of his sin before him wt the aggrevations of it, it was agreed that he be just now rebuked before the session for the same, & appear before the congregation this Day for the first time to make profession of his Repentance, he was accordingly rebuked by the Modr in the Name of the Lord Jesus Christ the alone King & Head of his Church, and appointed to appear before the congregation this day.

James Burgh in Airntully appeared this day before the Congregation, & was rebuked for the Sin & Scandal of Antenuptial Fornication

May 10th – James Burgh appeared for the second time before the Congregation, & made profession of his Repentance.

May 17th James Burgh appeared before the Congregation & was absolved from the Scandal of antenuptial fornication.


Just for good measure, they also upset the Associate Session, because they attended two different churches to confess their alleged sin:

May 31st (1778) Anne Lamb spouse to James Burgh compeared, acknowledged her having been guilty of the Sin & Scandal of antenuptial fornication wt sd James her Husband. After some conference & dealing wt her, the session understanding that both James & Anne had been attending last Lord’s Day in the parish church, had appeared before the session belonging to the Established Church & had made publick profession of their repentance before said Congregan, in obedience to sd session & that they were both absolved them. The session considering that their so doing was contrary to their profession as being members of this congregation and under the inspection of this session, who are in a state of secession from the established Church. They agreed to Delay the forsaid until afterwards. 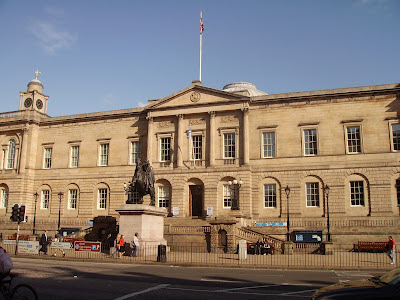 These cases were both sourced in just a day's work at the National Records of Scotland (www.nrscotland.gov.uk) from the kirk session records for the local nonconformist church, but I have also been going through additional estate papers for the Grandtully estate where the Broughs, Lambs, Hendersons, Rogers, and other lines lived. Of note in the series of papers known as hornings and arrestments was a court case where my seven times great grandfather James Brough (father to the above James), was cited to appear as a witness to a sheriff court case in Perth in 1744. He was asked to speak on behalf of Sir George of Grandtully, as part of a case to determine whether the appropriation of part of the common lands of the nearby Muir of Thorn by John McKenzie of Delvine, which was given in tack to a William Dow, was illegal (Source: NRS GD 121/1/Box 28/161, arrestments and hornings 1742-99; extract process Sir George Stewart of Grandtully & his tenents agt William Dow). Other records in this collection provide additional information on other relatives - for example, George Rodgie of Wester Burnbane was called to speak to the same case in 1750 (six years later - they took their time!), with the record noting he was aged 37, placing his birth in 1713.This was some 19 years before the parish baptism registers on ScotlandsPeople commence for Little Dunkeld (1732).

So why do I mention these examples? Because they contain useful genealogical and family history information that is not available online. If until now you have confined your research to the online sources for Scottish research such as ScotlandsPeople, then there is a world of material out there that can transform your research and your understanding about the lives of your ancestors.

It is for this reason that for the last few years I have been writing many guides for Unlock the Past (www.unlockthepast.com.au) to try to flag up how to access such collections, and to take folk to worlds beyond the usual online suspects. The records of property inheritance, of land transfers, of estate papers, churches, and the records to be found when our ancestors found themselves in times of crisis, all of these can be found in archives across the country, and are just waiting to be plundered by the hungry genealogist. To locate such collections you can visit the catalogues for the National Records of Scotland, the National Register of Archives for Scotland, and the Scottish Archive Network at www.nrscotland.gov.uk/research/catalogues-and-indexes. For details on archives themselves, visit the Scottish Council on Archives website at www.scottisharchives.org.uk/discover.

But it is not just enough to know where the records are, it also helps to understand the context in which they were recorded. How did feudalism work, which underpinned so many records from land sales to inheritance, what was the actual law behind civil registration, and why did the various church factions split from the Church of Scotland in the aftermath of the Reformation, and why are so many marriage records missing from the church and civil registers on ScotlandsPeople right up to 1940? Get to grips with all of that, and you will crack open a whole avenue of new possibilities for your Scottish research!

My Scottish based titles are, so far:

Whether you are inspired by Saint Andrew, or in need of a prezzie for yourself or a loved one for Christmas, hopefully these may help!

For further details on how to purchase them in the UK, Canada and Australia, please visit http://britishgenes.blogspot.co.uk/p/my-books.html

For details on my genealogy guide books, including my recently released Discover Irish Land Records and Down and Out in Scotland: Researching Ancestral Crisis, please visit http://britishgenes.blogspot.co.uk/p/my-books.html. My Pinterest account is at https://www.pinterest.com/chrismpaton/.
Posted by Chris Paton at 12:59