Forces War Records has now added over 100,000 records to those who were awarded the ‘Palestine 1945-48 clasp’ to the General Service Medal. 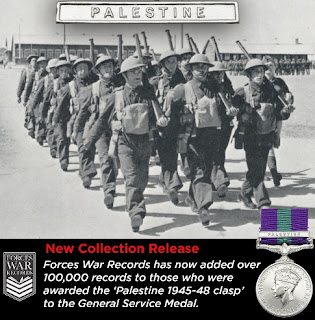 QUICK SUMMARY: Forces War Records has now transcribed over 100,000 records to those individuals who were awarded the ‘Palestine 1945-48’ clasp to the General Service Medal. This collection records those who served in Palestine during the Jewish insurrection against British rule in the mandate between 1945 and 1948.

CONTENT: The General Service Medal was a campaign medal awarded to men and women of both the British Army and the Royal Air Force (the Royal Navy had their own equivalent medal). This decoration was instituted in 1918 to recognise service within a range of military operations where the service merited an award, but the campaign itself was not significant enough to merit the creation of an independent medal.

The particular campaign or service which earned this award was indicated by a small bar worn on the ribbon of the medal, which would bear the name of operation moulded onto this clasp. This new transcribed collection records the award of the ‘Palestine 1945-48’ clasp (under Army Order 146 of 1947) to those who served in Palestine during the Jewish insurrection against British rule in the mandate between 1945 and 1948.

The criteria for the award of the ‘Palestine 1945-48’ clasp was a minimum of 1 day of service in the territory between 27th September 1945 (the date a "state of emergency" was declared) and 30th June 1948 (when the last British troops departed).

This collection is transcribed from the medal rolls housed at the National Archives, labelled WO 100 which recorded the men who were eligible for this clasp. Occasionally a man who had already received a clasp from a previous campaign (e.g. Palestine 1936-39) or a concurrent one (e.g. South-East Asia 1945-46) is also noted.

It is a particularly useful collection as amongst its considerable detail, is not only the unit with which they served on the operation where they earned the medal but also who they were with when the medal was conferred. Some records have even more detail with the exact dates the men entered and left the award area and the places they were stationed recorded – so you can start to build up an idea of their service history.

Records in this collection are likely to include the following:

• Surname
• First name or Initials
• Service Number
• Gallantry Awards
• Regiment or Corps
• Battalion, Company or other sub-Unit
• Previous unit served with
• Duty Location
• Previous clasps awarded
• Date of the award
• The army order under which the medal was awarded.

Please be aware that due to the way we collate, and cross-reference our databases, some records will contain more information than that listed above.
Quote: Forces War Records are pleased to present this now transcribed collection of records for the ‘Palestine 1945-48’ clasp to the General Service Medal, as a permanent memorial to those involved and an invaluable resource for genealogists. Also, we are glad to give users of the site addition information to those who served post World War Two at very specific times.

This August Bank Holiday Forces War Records is offering you HALF PRICE membership off monthly and yearly packages. – less than £25.00 for the year, or less than £5.00 for a month* (use code AUG2018)

(With thanks to Neil White)