Unlock the Past in Seattle conference LIVESTREAM

From Unlock the Past (www.unlockthepast.com.au), news of a forthcoming genealogy conference from Seattle which will be livestreamed:

Adelaide, South Australia, 14 August 2018 – Unlock the Past Cruises announces that the Unlock the Past in Seattle full-day two-stream conference (previously announced) will now also be available to watch live online – and for a limited time after as a series of 10 recorded webinars.

Venue:
– watch in your own home – from anywhere in the world
– attend in person at Seattle Public Library, 1000 4th Ave, Seattle, WA

Cost:
– US$65 – Unlock the Past in Seattle Livestream
– US$45 – attend in-person at Seattle Public Library, 1000 4th Ave, Seattle, WA
– US$20 – upgrade from in-person attendance to add access all 10 recorded sessions after 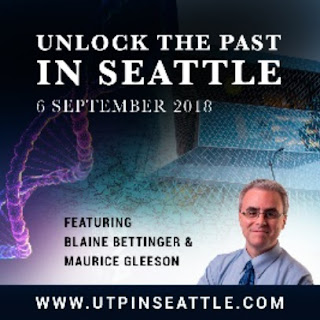 BLAINE BETTINGER (USA) – Blaine is a professional genealogist specialising in DNA evidence. He is the author of the long-running blog The Genetic Genealogist and the books The family tree guide to DNA testing and Genetic genealogy.

CYNDI INGLE (USA) – Cyndi is the creator and owner of the award-winning web site Cyndi’s List of Genealogy Sites on the Internet cyndislist.com, a categorised index to more than 333,000 online resources. In its first three years, Cyndi’s List was voted the best genealogy site.

WAYNE SHEPHEARD (Canada) – A retired geologist, Wayne now spends most of his time on family history research. This has resulted in the pioneering publication Surviving Mother Nature’s tests: The effects climate change and other natural phenomena have had on the lives of our ancestors.

About Unlock the Past

Australian based Unlock the Past was established in 2009. It is the event and publishing division of Gould Genealogy & History which has served family and local historians since 1976. It is a collaborative venture involving an international team of expert speakers, writers, organisations and commercial partners to promote history and genealogy through innovative major events and a new publishing brand. It also maintains general and events directories online. Since 2010 Unlock the Past has run over 130 events, including expos, roadshows, regional seminars, history and genealogy cruises around the world – even Australia’s first ever battlefield tour. They’ve published over 100 guide books and handy guides for researchers, all of them offered in print and ebook editions.

For my genealogy guide books, visit http://britishgenes.blogspot.co.uk/p/my-books.html, whilst details of my research service are at www.ScotlandsGreatestStory.co.uk. Further content is also published daily on The GENES Blog Facebook page at www.facebook.com/BritishGENES.
Posted by Chris Paton at 19:11

Email ThisBlogThis!Share to TwitterShare to FacebookShare to Pinterest
Labels: conferences, livestream, Unlock the Past, USA