There are now almost 50,000 records from Botley, Rose Hill, and Wolvercote cemeteries, from 1894 to 2016, available on www.deceasedonline.com. Records for Headington cemetery have been digitised and will be released at a future date.

Oxford is the county town of Oxfordshire in the South East of England and is known throughout the world as the home of the University of Oxford, the oldest university in the English speaking world. In the city there are examples of buildings from every major period of English architectural history. Oxford’s industries include motor manufacture, education, publishing, IT, and science.

The records comprise digital scans of all burial registers up to 2007 and computerised data from 2007 to 2016, maps showing the section in which the grave is located, and grave details for each of the graves and their occupants. 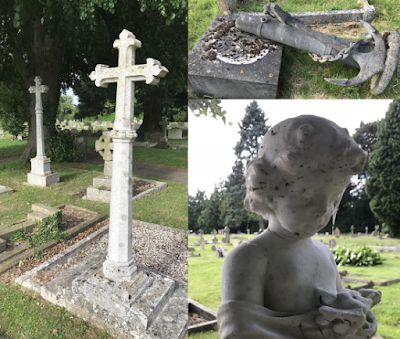 Cemeteries in Oxford provide the final resting place of many notable people throughout history. JRR Tolkien, world famous author of the Hobbit and Lord of the Rings rests in Wolvercote cemetery. He spent almost his entire adult life in Oxford and at 76 Sandfield Road, Headington, his residence for a number of years, there is a plaque displayed commemorating him.

John Richard Charters Symonds (aka Richard Symonds) is also buried at Wolvercote. He worked hard in humanitarian service in India after the partition from Pakistan and, after contracting typhoid fever, was cared for by his friend Gandhi. He worked for the UN for nearly 30 years. Symonds wrote about his relief work in the ex-colonies and was a champion of gender equality.

Edward Brooks, awarded the Victoria Cross in 1917, is buried in Rose Hill. Sergeant-Major Brooks single handedly charged an enemy machine gun, killed one gunner with his revolver and bayonetted another, causing the remaining gun crew to flee. Brooks recovered the gun and brought it back behind Allied lines, preventing many casualties.

Further information:
For other local records in the region available on Deceased Online courtesy of the National Archives for Oxfordshire, Berkshire, and Buckinghamshire, click here.

For my genealogy guide books, visit http://britishgenes.blogspot.co.uk/p/my-books.html, whilst details of my research service are at www.ScotlandsGreatestStory.co.uk. Further content is also published daily on The GENES Blog Facebook page at www.facebook.com/BritishGENES.
Posted by Chris Paton at 19:33