I occasionally take a look to see what might pop up on the catalogue of the FamilySearch website (https://familysearch.org), and have just found a very useful collection for those seeking ancestors who may have inherited Scottish land and property (heritage) - i.e. the stuff not found on the ScotlandPeople's wills collection, which mainly deals with the inheritance of moveable property prior to 1868. The records in question are the indexes to the Services of Heirs from 1700-1859: 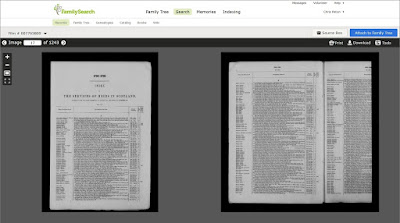 From my book, Researching Scottish Family History, a brief introduction to the records:

The other form of personal estate to be dealt with after death was heritable property. Until 1964, the law of primogeniture meant that the eldest son usually inherited his parents’ land and any properties thereon, though from 1868 this could be bequeathed in a will to other members of the family. In order for an heir to inherit, however, he or she had to have that right legally confirmed through the Services of Heirs process. This basically meant that a prospective heir went before a jury of local landowners to have his or her right confirmed. The jury would deliberate on the matter and then return or ‘retour’ its findings to the Royal Chancery in Edinburgh.

The recorded retours were in Latin until 1847, with the exception of the period 1652 to 1657 (Cromwell’s Commonwealth period). Records for 1530 to 1699 were summarised in the Inquisitionum ad Capellam Regis Retornatarum Abbreviatio, an index for which can be consulted at the NRS (within the General Register House search room). From 1700-1859 you need to consult the Indexes to the Services of Heirs. The retours process in fact continued until 1964, but by then most land was being conveyed through wills, making the process virtually irrelevant.

Once an heir had been confirmed legally, they then had the right to inherit. In truth however, many people put off going through the process for years and took possession of the property in question straight away. It was only when they then wanted to sell the property at a later stage that they would suddenly have a panic about getting the paper work sorted. In other cases, the process took years because of legal challenges to the heir’s right to inherit. As such, the record can often be found years or even decades after you might expect to find it.

That's a simplistic overview of the Services of Heirs records, and considerable more detail can be found on how to use them in my book Discover Scottish Land Records (2nd edition) - here's a brief section about how to search them:

Additional indexes for retours from 1700-1859 are available at the National Records of Scotland and can also be purchased on a CD. These abridgements are written in English, but both Special and General Services are now listed together. There are again two separate lists, however, the main index and the accompanying supplement.

The records are indexed alphabetically in periods of ten years, starting with 1700-1709, 1710-1719 and so on. All heirs are found in the main index, with the following an example:

If you wish to find the name of the heir to a particular ancestor, and that heir has a different surname to the deceased, you will need to consult the Supplement that accompanies each decennial listing, which acts as a finding aid. A typical example would be:

Names of the Persons served to, by Heirs not bearing the same Names
Stevenson – John – Wright, Kilsyth
Names of the Heirs – which see in the Principal Index
Renny – Jean – (or Gillies) – (Heir of Provision General)

Having found the name of the ancestor John Stevenson, I would now need to go back to the original index and look up Jean Renny’s entry for the full index details recorded for her relevant retour.

And that's just the start of it! Discover Scottish Land Records is available from outlets in the UK, Australia, New Zealand, Cananda and the USA - see https://britishgenes.blogspot.com/p/my-books.html for details. 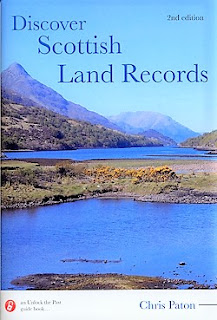 UPDATE: Just for good measure, the earlier records from 1530-1700 (Inquisitionum ad capellam regis retornatarum ... abbreviatio), are available at https://www.familysearch.org/search/catalog/248869?availability=Family%20History%20Library - but best to dust off your Latin skills if you want to use them! (Again, there's further info in my book on how to do so)

Also, just to add - there's currently a sale on for my book in Australia through Gould Genealogy - see https://www.gould.com.au/discover-scottish-land-records/utp0283/.

For my genealogy guide books, visit http://britishgenes.blogspot.co.uk/p/my-books.html, whilst details of my research service are at www.ScotlandsGreatestStory.co.uk. Further content is also published daily on The GENES Blog Facebook page at www.facebook.com/BritishGENES.
Posted by Chris Paton at 20:21