It has been a while since I came across a genealogy or local history themed book that radically redefined my sense of a subject, but Frances McGee's The Archives of the Valuation of Ireland 1830-1865 is an absolute gem, worthy of a place on any genealogist's bookshelf. 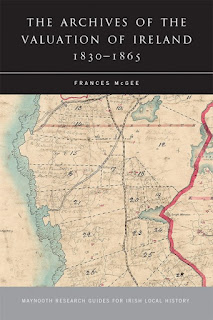 You may be familiar with various record sets from the 19th century in Ireland which are often cited as 'census substitutes', such as the Townland Valuation and Griffith's Primary Valuation, but what you may be considerably less familiar with are the contemporary circumstances in which the various valuation records were created in the first place. The first Valuation Act was passed in 1826 – but what was its purpose, how was the act of valuing property across Ireland carried out, who did the work, and what were the results used for? Between 1826 and 1864 there were twelve separate Valuation Acts, changing the goalposts within which Richard Griffith had to steer his teams on a regular basis, such as whether the basic unit of valuation should be the townland or the tenement, whether the rateable value should be set at £3 or £5 annually, and even whether the barony or the Poor Law Union should be the unit on which the surveys were recorded.

McGee's book superbly describes 19th century Ireland as a virtual laboratory in which Griffith developed the valuation system which would continue in use until the late 20th century, amidst a plethora of competing demands by various wings of local government. A former archivist in the National Archives in Ireland for forty years, McGee has provided a much needed expert guide to help users, including genealogists, understand exactly what they are looking at when consulting Griffith's Primary Valuation, freely hosted at http://askaboutireland.ie/griffith-valuation/, or the earlier general, field, tenure, quarto and house books hosted at http://census.nationalarchives.ie/search/vob/home.jsp.

The book is structured over 8 main sections:

Although Ireland was a single unified country throughout the valuation period, the book concentrates on the records held in the modern day Republic, although due consideration is also given to the records held at Northern Ireland's national archive, PRONI, with the records differing slightly in the way that they are catalogued and described. The book perhaps understandably cuts off at 1865, but this means that the Cancelled Land Books, aka the Valuation Revision Books, get only a brief hearing. Nevertheless, you will not feel short-changed by the experience, because this is by far the most definitive publication on the subject yet.

At 240 pages long, and beautifully illustrated with colour plates, the book is available from Four Courts Press at http://www.fourcourtspress.ie/books/2018/the-archives-of-the-valuation-of-ireland/, priced at €17.95 - and is thoroughly recommended.

For my genealogy guide books, visit http://britishgenes.blogspot.co.uk/p/my-books.html, whilst details of my research service are at www.ScotlandsGreatestStory.co.uk. Further content is also published daily on The GENES Blog Facebook page at www.facebook.com/BritishGENES.
Posted by Chris Paton at 20:12