I announced a few days ago that my new book on British and Irish newspapers had just been released by Unlock the Past (via http://www.gould.com.au/British-and-Irish-Newspapers-p/utp0285.htm), but the company also has another title that might be of interest to readers here in Britain and Ireland. So You Are Totally New to Family Tree Maker (New Edition) is written by John Donaldson. Here's the blurb: 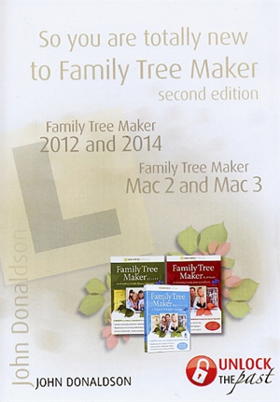 Family Tree Maker, usually called FTM, is Australia's largest selling genealogy program. It has enjoyed huge success and is now in its 22nd iteration as FTM 2014. In December 2013 Ancestry.com announced Family Tree Maker for Mac 3 which was released in Australia in March 2014.

The program has developed extensively and since purchased by Ancestry.com in 2004, it has become even more tightly integrated with the Ancestry.com database. It has become very internet aware with its use of Bing Maps and the ability to link to internet sites like Trove from within the program as well as using a very convenient web clipping and merging capability.

The program is sold throughout Australia and New Zealand in retail packs that include access to Ancestry.com paid databases.

This book is intended to be the first of a series about Family Tree Maker, and covers the absolute basics that users, with very little computer understanding can get up and running.

The book will take new users through installation, registration, activating an Ancestry.com subscription, followed by an introduction to creating or importing files. The book introduces new users to the eight workspaces within the program with enough simple explanation to start using it.

Extensive use is made of screen shots to assist the user to understand what he or she is seeing on the screen.

I should add that I used to absolutely hate this version of the programme - but have recently been convinced of its value following the original appearance of the rebooted version of the software a few years ago. This was partly because it was the software chosen for the University of Strathclyde genealogy programme on which I tutored last year, forcing me to use it in marking student assessments, but I now use it more wilfully as my primary programme for personal research (though not for client work), because it effectively allows me to sync my tree online at Ancestry and on my iPad - making it a much more powerful and worthwhile tool than it ever was before. The fact that it is now available in a Mac format will also be of interest to many.

I still don't like its boring tree charts though! But if you have the programme, I suspect this guide will be a good investment.

Now available for UK research is the new second edition of the best selling Tracing Your Family History on the Internet: A Guide for Family Historians. And for those wishing to take Scottish ancestral research a bit further, my next Pharos course, Scotland 1750-1850: Beyond the Old Parish Records, commences May 14th 2014.
Posted by Chris Paton at 19:39

Email ThisBlogThis!Share to TwitterShare to FacebookShare to Pinterest
Labels: Ancestry, books, ebooks, software, Unlock the Past