I blogged recently at http://britishgenes.blogspot.co.uk/2014/05/8th-unlock-past-cruise-to-tour-northern.html that Unlock the Past has now confirmed a Baltic venture in July 2015 as part of its genealogy cruises programme. The cruise, starting and ending in Southampton, is scheduled to last two weeks and will include stops at Bruges, Berlin, Tallinn, St Petersburg, Helsinki, Stockholm and Copenhagen, as well as a packed genealogy conference on the high seas. 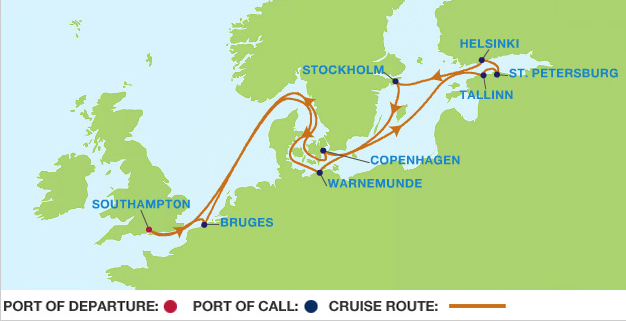 Well now some news on some of the confirmed presenters so far. Cyndi Ingle from Cyndi's List fame (http://cyndislist.com) will be participating on her first Unlock the Past cruise, as will US based genealogist Paul Milner (www.milnergenealogy.com) on his second voyage with the firm, who specialises in British Isles research. From Australia will be genealogist Carol Baxter, and all the way from Largs, North Ayrshire, yours truly will also be taking part, in what will be my third cruise with Unlock the Past. Also provisionally signed up from Australia are Rosemary and Eric Kopittke and Helen Smith, whilst Carol Becker is another name down from the States.

As previously mentioned, there are substantial discounts available if you wish to book early before May 31st 2014 - with an early booking discount of AU$50 from Unlock the Past, and a special Celebrity Eclipse bonus of US$100-US$125 on-board credit for bookings before the same date.

As ever with Unlock the Past Cruises - should be fun!

Now available for UK research is the new second edition of the best selling Tracing Your Family History on the Internet: A Guide for Family Historians, whilst my new book British and Irish Newspapers is also now out. And FindmyPast - please reinstate the original Scottish census citations on your new site.
Posted by Chris Paton at 19:46

Email ThisBlogThis!Share to TwitterShare to FacebookShare to Pinterest
Labels: cruises, Europe, Unlock the Past