The last wishes of Scottish soldiers at the Front: The National Records of Scotland release Soldiers’ Wills from WW1, WW2, the Boer War, Korean War and other conflicts between 1857 and 1964 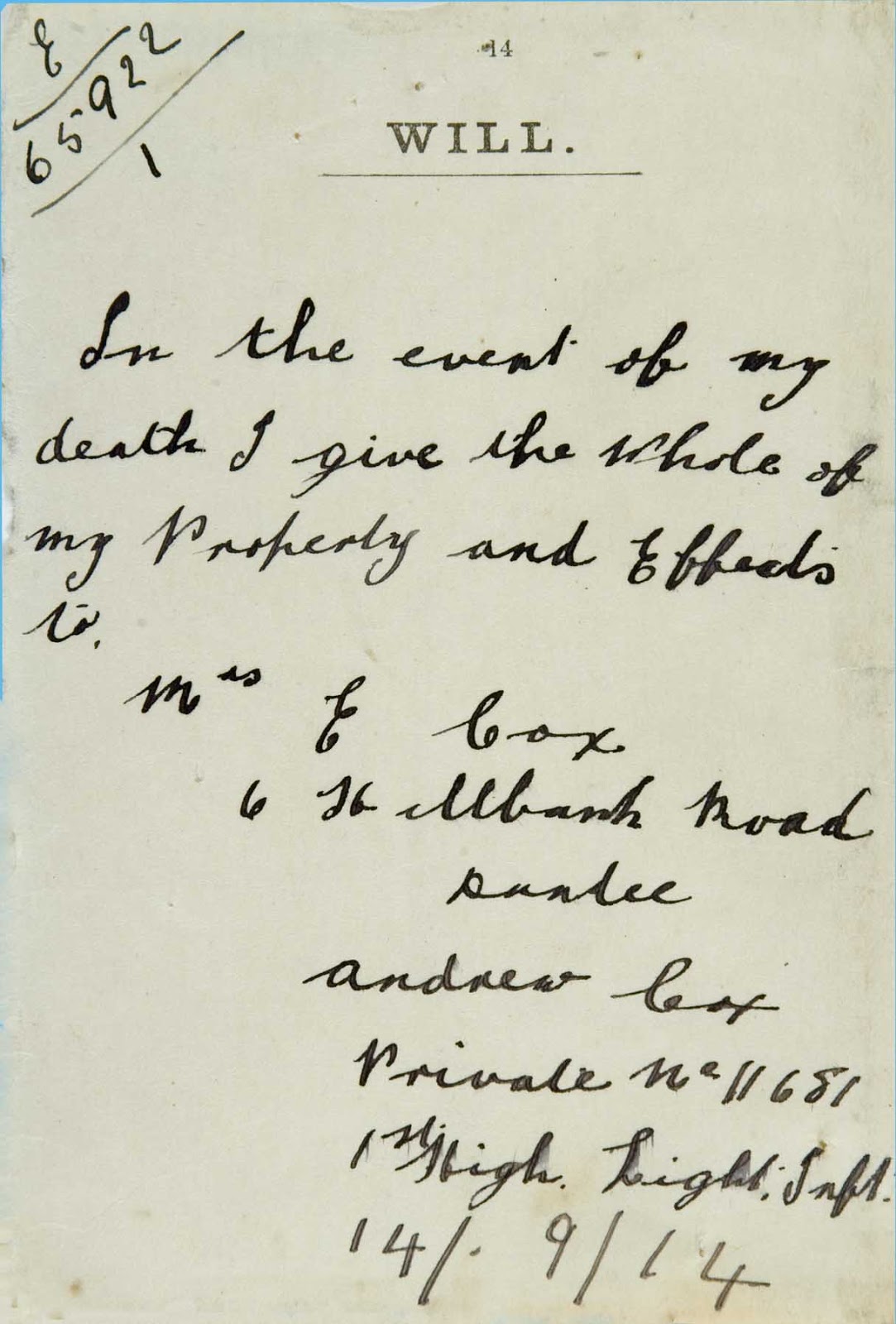 The wills of 31,000 Scottish soldiers are being made available online by the National Records of Scotland as part of commemorations of the 100th anniversary of the outbreak of the First World War. The poignant documents include the last wishes of 26,000 ordinary Scottish soldiers who died in the Great War.

The new records contain the wills for ancestors of some famous Scots. For instance, John Feeley, the great-great-grandfather of the Paisley musician, Paolo Nutini, is included. Private Feeley served in the Argyll and Sutherland Highlanders and died of wounds sustained during the Battle of Arras on 23 April 1917. Feeley left all of his property and effects to his wife, Annie, who lived until 1964.

Researchers at the National Records of Scotland have also discovered the will of Andrew Cox, the uncle of Dundee-born actor, Brian Cox. A rope-worker before the war, Private Andrew Cox served with the Highland Light Infantry and was killed in the Battle of Neuve Chapelle, aged 22 - sadly, his body was never identified. Like many unmarried soldiers, Andrew Cox left all of his possessions to his mother, Elizabeth.

The records are drawn from all the Scottish infantry and cavalry regiments, as well as the Royal Artillery, Royal Army Medical Corps, Royal Army Service Corps, the Machine Gun Corps and other units, and a few who served in the Royal Flying Corps and the RAF. Almost all the wills were written by soldiers below officer rank, but some wills for commissioned officers are also included.

In addition to the wills from the Great War, there are almost 5,000 from Scots soldiers serving in all theatres during the Second World War, several hundred from the Boer War and Korean War, and wills from other conflicts between 1857 and 1964.

“These small but powerful documents are a testament to the sacrifice in wartime made by thousands of Scots, not only the soldiers themselves, but also their families and loved ones.”

Tim Ellis, Registrar General and Keeper of the Records of Scotland, said:

“We are privileged to be marking the centenary of the start of the First World War by making these remarkable records available. They give us a unique insight into the service of Scottish soldiers during the First and Second World Wars, but also in other conflicts before and since.”

Annelies van den Belt, the CEO of DC Thomson Family History, who enable the ScotlandsPeople website on behalf of the National Records of Scotland, said:

“We’re very pleased to add this new set of records to the ScotlandsPeople site. These fascinating documents make for poignant reading and we’re sure that anyone who views the wills will feel a strong emotional connection to those who lost their lives in these conflicts.”

The Soldiers’ Wills are available at www.ScotlandsPeople.gov.uk, at the ScotlandsPeople Centre in Edinburgh, and at local family history centres in Glasgow, Kilmarnock, Hawick and Inverness.

Image - the First World War will of Andrew Cox, uncle to actor Brian Cox. Photo courtesy of the National Records of Scotland.

NB: For the rest of what was the UK at this point - Irish First World War wills are freely available at http://soldierswills.nationalarchives.ie/search/sw/home.jsp; for England and Wales, visit pay-to-use site https://probatesearch.service.gov.uk/. Some UK soldiers' wills are also calendared (abridged) in the National Probate Calendar on www.Ancestry.co.uk.

(With thanks to Grant Millar at DC Thomson Family History)

Now available for UK research is the new second edition of the best selling Tracing Your Family History on the Internet: A Guide for Family Historians, whilst my new book British and Irish Newspapers is also now out. And FindmyPast - please reinstate the original Scottish census citations on your new site.
Posted by Chris Paton at 01:56