There can't be many of us who do not have a connection to D-Day and Operation Overlord.

My grandfather's cousin John Brownlie MacFarlane, from Inverness, did not arrive in Normandy until shortly after D-Day (I believe it was D-Day+6, at Caen), with 194 Field Ambulance, but as lieutenant colonel at the time of his RAMC unit, he continued to push through France and across the Seine as part of Operation Overlord. He was given the Croix de Guerre for his actions during the campaign. 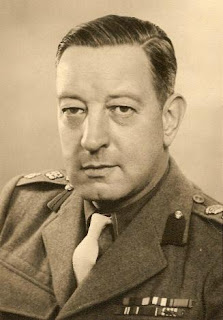 This is just some of the coverage and resources from countries whose Allied forces took part in D-Day:

It was a good job well done, for a Europe that was well worth fighting for.

Pre-order Tracing Your Irish Family History on the Internet (2nd ed) for just £11.99 at https://www.pen-and-sword.co.uk/Tracing-Your-Irish-Family-History-on-the-Internet-Paperback/p/16483. Details of my genealogical research service are available at www.ScotlandsGreatestStory.co.uk. Further news published daily on The GENES Blog Facebook page, and on Twitter @genesblog.
Posted by Chris Paton at 19:50