Finding the gravestone that doesn't exist

I made one hell of a discovery tonight, which has left me absolutely stunned.

When I first started my family history research in late 1999, I was living in Glasgow. It did not take long to discover the details of my grandmother's parents and family, who lived in Bridgeton, but it was not until a few years later that I decided to see if I could locate where my great grandparents Robert Currie and Elizabeth Morrow - my father's grandparents - might have been buried.

I contacted Glasgow City Council's burials department, and they soon replied to inform me that the couple had been laid to rest at the city's Eastern Necropolis - something which initially amused me, it being so close to Celtic Park (let's just say my great grandfather would not have been a supporter!). I was given the lair details, and soon visited the cemetery, where I met a council worker who directed me to the lair, only for me to be disappointed to find there was no gravestone, as is the case with most of my ancestors. Nevertheless, I paid my respects, and moved on.

Tonight I received a MyHeritage.com email noting potential record matches, which on most occasions I tend to dismiss. I was intrigued, however, to note there was a BillionGraves.com record noted for a headstone for a Robert Currie at Riddrie Park Cemetery, who died in 1929 (https://billiongraves.com/grave/Robert-Currie/24664136). My grandmother Jean Currie had a brother called Robert who died in 1929, and so out of curiosity I clicked on the link. The following was the inscription I found on the image of the headstone that was returned:


Say what? My great grandfather was also buried at Riddrie Park?

Just over a year ago I blogged the news that several burial registers for Glasgow were now freely available on FamilySearch (see http://britishgenes.blogspot.com/2018/03/glasgow-burial-registers-online.html). I remembered that Riddrie Park was one of the cemeteries included, and so consulted the records. Within twenty minutes, I not only confirmed that my father's uncle and grandfather were indeed buried there, but also my father's grandmother, and his aunt, along with my grandmother's cousin Ellen Morrow. 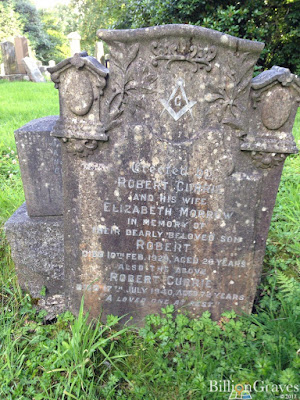 In the last twenty years, I have been able to count the number of gravestones that I have found for my direct ancestors on one hand. So this is mega!

Some lessons to learn. Never assume the research is done when you think it is done, and ALWAYS try to view the original records yourself!

A trip to Glasgow will be happening imminently...

Pre-order Tracing Your Irish Family History on the Internet (2nd ed) for just £11.99 at https://www.pen-and-sword.co.uk/Tracing-Your-Irish-Family-History-on-the-Internet-Paperback/p/16483. Details of my genealogical research service are available at www.ScotlandsGreatestStory.co.uk. Further news published daily on The GENES Blog Facebook page, and on Twitter @genesblog.
Posted by Chris Paton at 00:34