Scottish Enlightenment exhibition to open at National Library of Scotland

From the National Library of Scotland (www.nls.uk):

A major exhibition exploring the Scottish Enlightenment, Northern Lights, will open at the National Library of Scotland on Friday 21 June.

The exhibition takes a fresh look at one of the most concentrated periods of intellectual enquiry the world has ever seen, a time when polymaths peer-reviewed, challenged and encouraged one another's work through the many social networks available to them.

Household names connected with the Scottish Enlightenment such as David Hume and Adam Smith feature in the exhibition, as well as other figures less commonly associated with it such as Robert Burns and James Watt. A rare first edition of Encyclopaedia Britannica will be on display, as will a first edition of Smith's 'The Wealth of Nations' and countless unique manuscripts. 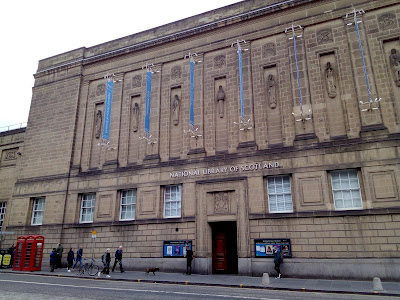 'We have an unparalleled collection of items relating to the Scottish Enlightenment. Indeed, some of the chief figures of the Enlightenment such as David Hume and Adam Ferguson worked at our predecessor institution, the Library of the Faculty of Advocates.

This exhibition tells the story of those who helped shape the world we live in today. These individuals developed radical ideas on theology, the sciences, economics and identity, amid a growing awareness of the world around them.

The exhibition celebrates 18th-century Scotland as a place of enlightened discourse and debate. It was a time of mutual respect and politeness, where people appreciated each other's opinions and values, and further developed their theories on the basis of such conversations. Some may find this of great contrast to the present day, where people are less inclined to expose themselves to other ideas.

We present the world as it was then, and we are in prime position to do so given we were actively collecting items relating to the Enlightenment during the Enlightenment itself. We welcome those whose appetite is whetted by the exhibition to explore these ideas further at our reading rooms, and we will also be examining this period with a contemporary lens in our programme of talks and events.'

Northern Lights is curated by Robert Betteridge, Curator of 18th-Century Printed Collections, and Ralph McLean, Curator of Manuscripts for the Long 18th Century. It explores the Scottish Enlightenment through the display of rare books and manuscripts from 18th-century Scotland, and is grouped into themes: pre-Enlightenment Scotland, moral philosophy and religion, social science and academic innovation, language and literature, art and architecture, science and medicine, and sociability and society.

Northern Lights opens to the public on Friday 21 June and runs until 18 April 2020 at the National Library of Scotland, George IV Bridge, Edinburgh EH1 1EW. Entry is free.

Pre-order Tracing Your Irish Family History on the Internet (2nd ed) for just £11.99 at https://www.pen-and-sword.co.uk/Tracing-Your-Irish-Family-History-on-the-Internet-Paperback/p/16483. Details of my genealogical research service are available at www.ScotlandsGreatestStory.co.uk. Further news published daily on The GENES Blog Facebook page, and on Twitter @genesblog.
Posted by Chris Paton at 17:15