NRS is working on a Gaelic Language Plan

In 2017 the Scottish Government published its Gaelic Language Plan for 2016-2021 (https://www.gov.scot/publications/scottish-government-gaelic-language-plan-2016-2021/), as part of efforts with Bòrd na Gàidhlig to help restore Gaelic speaking in Scotland to the levels recorded in the 2001 census (it having fallen in 2011).

In the section entitled Implementation of the Gaelic Language (Scotland) Act 2005, it notes the following sections:

A wide range of other agencies and NDPBs carry out functions on behalf of the Scottish Government, and through their activities are likely to enhance the status of Gaelic. Creative Scotland, Scottish Natural Heritage, National Records of Scotland, and others are all involved in promoting and supporting the Gaelic language in a variety of ways. 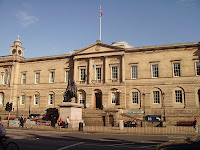 In working on my next book yesterday, I noticed that the National Library of Scotland (www.nls.uk) and Historic Environment Scotland (www.historicenvironment.scot) have a visible Gaelic profile on their home pages, noting their agencies' names bilingually, but that the National Records of Scotland does not. The NLS has a Gaelic Language Plan (see https://www.nls.uk/news/archive/2018/02/draft-gaelic-language-plan-2018-2023), as does Historic Environment Scotland (https://www.historicenvironment.scot/archives-and-research/publications/publication/?publicationId=6100001d-485b-4d0e-90ea-a94900a2db24), but I was unable to find one for the NRS.

I therefore queried this on Twitter, and have just received the following response from the archive:

Hi Chris: NRS is working with stakeholders to develop a Gaelic language plan, in tandem with our work to prepare for Scotland’s Census 2021. Ross 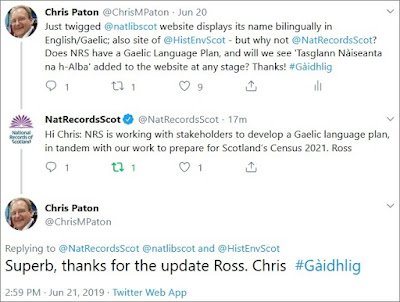 It's good to see that the NRS is not ignoring this. For some folk, it won't make a difference if we see a bit of rebranding to include Gaelic on the site, and the NRS does already include some Gaelic on correspondence that it sends, but a Gaelic Language Plan is certainly something that is needed to promote the language's use in other ways.

For those who have Gaelic as a working language in their daily lives, and for those of us who are learning (some of us for twenty years or more!), it is important to see such small measures in helping to recognise and promote our heritage and to help promote equality for a language so important to Scotland's history and psyche.

(With thanks to the NRS)

Pre-order Tracing Your Irish Family History on the Internet (2nd ed) for just £11.99 at https://www.pen-and-sword.co.uk/Tracing-Your-Irish-Family-History-on-the-Internet-Paperback/p/16483. Details of my genealogical research service are available at www.ScotlandsGreatestStory.co.uk. Further news published daily on The GENES Blog Facebook page, and on Twitter @genesblog.
Posted by Chris Paton at 15:36