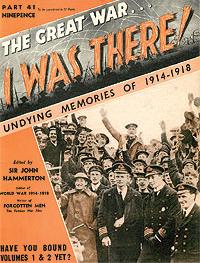 The library which is available via the Forces War Records website, holds a huge catalogue of interesting articles. Forces War Records have managed to get hold of complete publications of some literature, many from as far back as the first world war.

Dominic Hayhoe from Forces War Records said "Whilst we've been adding records as fast as we can to the main site, we've collated a huge amount of books, newspapers and magazines that although they don't have name records in, are invaluable for research purposes with details about regiments, battles, medals, individual daring escapades and general interest stories.

Some of these magazines alone are almost a hundred years old and not only did we feel our members would love to read them, but that they were also a national treasure that shouldn't be lost. Now we have digitised them, they will be available for ever more".

He went on to say “In addition, as ever, we haven’t just added these to our site, but we have also automatically crossed matched them with all our other data, so if you perform a search for a relative on the site who say served in The Royal Tank Regiment, our system will automatically look to see if we have any articles related to the regiment your ancestor served in as well.”

Forces War Records holds the most complete online database of military service records, and offers a complete service for those involved in ancestry searches. The database includes records from WW2, WW1, the Boer War, the Crimean War and beyond. It is the only online database with over 4 million military records of British Armed Forces personnel exclusively cross matched with over 4000 Regiments, Bases and Ships of the British Armed Forces going back to before 1350.

COMMENT: There is quite a substantial amount of material here. Although it states you can browse, you actually have to go to an A-Z page, and click on each letter to see the list of titles commencing with that letter. You then get an image of each cover in a list. The problem here is that it takes ages to work your way through them all, as each page returns 10 images at a time, with four pages to go through for the letter A alone. In other words a simple list of titles on a page would be an incredible help, before I develop arthritis clicking through them all!

On the plus side, there is a seriously substantial amount of good stuff here. You get a limited preview of certain pages from each magazine or document, but to view the whole magazine you need to be a subscriber - a month's subscription is £8.95.

I have to admit that I have not really paid too much attention to the site in the past, as some of the material there is on other sites I am already subscribed to. However, I've just had a wee play on it, and there is a great deal more to it than I at first thought. The search screen is a bit too simplistic for the military records - any search tells you a record has been found, but not what type of record, so the only way to see is to subscribe, which could be frustrating if you then discover you already have that record - nevertheless, the site is well worth exploring.